Ballad of the ‘Tween Angel

But by yesterday, Cyrus was backtracking. expected to hit Cyrus's Hanna Montana phenomenon and its parent company, Disney. 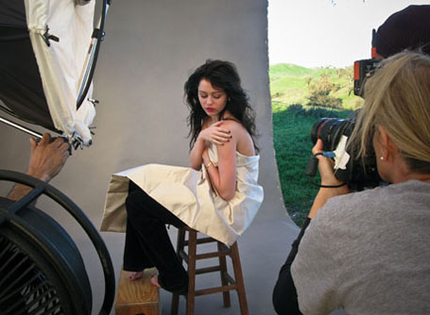 “You can’t just say no to Annie.” That was part of the explanation given by 15-year-old superstar Miley Cyrus after photographs were made of her “backless” and clutching a blanket by Annie Leibovitz for Vanity Fair. (A VF behind-the-scenes shot is above.) “I think it’s really artsy,” she told the magazine at the time. “It wasn’t in a skanky way.”

But by yesterday, Cyrus was backtracking. “I took part in a photo shoot that was supposed to be ‘artistic’ and now, seeing the photographs and reading the story, I feel so embarrassed,” she said in a publicist’s statement. She further criticizes the magazine in a People article, as the more financially minded press mulls over the fallout expected to hit Cyrus’s Hanna Montana phenomenon and its parent company, Disney.

What gives? Having shot to the heights of international fame at such a young age, is Cyrus an example of media exploitation or, rather, a reflection of prudish attitudes about portraiture?

Culture
news
State Of The Art