Marilyn Wars: The Empire Strikes Back

The law firm of Loeb Sam Shaw, and Tom Kelley, all of who famously photographed Marilyn. 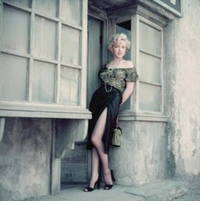 The law firm of Loeb & Loeb didn’t waste any time in striking back at the heirs of photographers who once photographed Marilyn Monroe.
Loeb & Loeb represents the company called Marilyn Monroe LLC, which over the past couple of decades has claimed ownership of the late actress’s “rights of publicity.” In exercising those rights, the company came into conflict with the heirs of photographers Milton Greene (who made the 1956 photo above), Sam Shaw, and Tom Kelley, all of who famously photographed Marilyn. The heirs of the photographers claimed that Marilyn Monroe LLC interfered with their ability to market the images that their forebears made (and to which they now hold the copyright.) The fight went to court last year, and pitting the relatively recent idea of rights of publicity over the far older idea of copyright protection.
For a while it looked like copyright might win: Courts in New York and California found that Marilyn Monroe LLC couldn’t claim ownership of her rights of publicity because such rights didn’t exist when the actress died in 1962. Those court losses might have been devastating to the company, which over the past two decades has earned millions of dollars a year by marketing the late actress’s name and likeness on an endless list of key chains, T-shirts, and other merchandise. (Forbes magazine ranks Marilyn at or near the top of its yearly list of top-earning dead celebrities.)
So Marilyn Monroe LLC did what it does best and played the power game, hiring Loeb & Loeb to help push a bill through the California legislature that effectively abrogated the court rulings.
And today came a press release from the law firm announcing that, in light of the new law, which went into effect of January 1, it had secured an order in the Los Angeles Federal District Court “granting reconsideration of the previous summary judgments.”
Please check out my previous posts on this subject to learn the truly serpentine history of Marilyn Monroe LLC, whose connections with the late star are thin both morally and legally. The way this case has played out so far is bad for all photographers and anyone who believes that the words or pictures they have create should be protected from avaricious companies and their lawyers.–David Schonauer