An Evening with Jodi Cobb and Tipper Gore: How Photos Can Change the World

Can photographs make the world a better place? Most of us involved in the photo business would like to believe so. But do they? Sometimes, even the most high-minded photographers have doubts, especially those who have seen first-hand the ignoble way humans can behave toward each other. 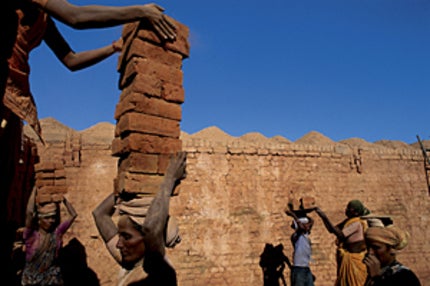 Can photographs make the world a better place? Most of us involved in the photo business would like to believe so. But do they? Sometimes, even the most high-minded photographers have doubts, especially those who have seen first-hand the ignoble way humans can behave toward each other. After witnessing war and other types of brutality, it can take a leap of faith simply to go on pushing the shutter button.

Last night I was honored to take that leap of faith with National Geographic photographer Jodi Cobb and Tipper Gore at the Corcoran Gallery of Art in Washington, D.C. Cobb and Gore, the wife of former vice president Al Gore and a veteran photographer herself, presented a sharp and at times moving lecture focusing on the power of photography to change the world for the better. As if to underscore their theme, Al Gore, who used imagery to great effect in his Oscar-winning film “An Inconvenient Truth,” sat in the front row of the lecture hall.

Cobb led off the evening by showing samples of her blockbuster Geographic story about the global trade in slaves. Yes, she assured the crowd, slavery exists and is growing. “It’s the third largest criminal enterprise in the world,” she noted. Her images—young girls in Africa being sold into marriages with older men, European women forced into prostitution in Israel, children and adults alike working in bondage in brick kilns in India (above)—take the masterful aesthetics of National Geographic photography into a new area. “Essentially, these pictures are evidence,” Cobb said. And powerful evidence, at that: The story, said Cobb, provoked the biggest reaction from readers in the history of the magazine.

For her part of the lecture, Gore offered a collection of her private images, showing how photography has been woven through her life. The show included a sexy shot of a college-age Al with shaving cream on his face–the photographic equivalent to the steamy lip lock he put on his wife during the 2000 Democratic convention. The slide show also included wildlife and landscapes that Gore has made in recent trips to British

Columbia and Jackson, Wyoming. Gore also looked back at photographic projects she helped organize in the 1980s and 1990s to publicize the issue of homelessness in America.

Cobb at one point hinted at the frustration sometimes felt by photographers with high aims. It is one thing to take pictures, she said, and another to do the kind political “heavy lifting” that actually brings about change. Mrs. Gore replied that images are an essential part of the process, and she should know.