The press department at Christie’s auction house invited a few members of the press over for luncheon a couple of days ago, not to look at any art but to meet some new people. The personnel moves don’t amount to a shakeup, exactly, because nobody has been fired. 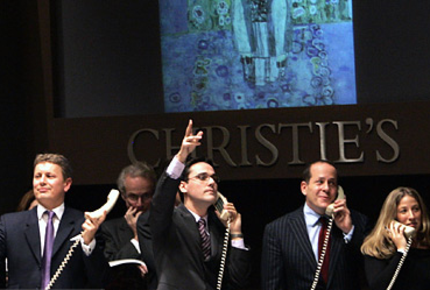 The press department at Christie’s auction house invited a few members of the press over for luncheon a couple of days ago, not to look at any art but to meet some new people. The personnel moves don’t amount to a shakeup, exactly, because nobody has been fired. But they do offer a clue as to the long-range future of photography as it becomes increasingly integrated with contemporary art.
This trend, at least, can be laid at the feet of Joshua Holdeman, who remains at Christie’s International Director and Head of Christie’s New York Photography and 20th Century Decorative Art & Design departments. Philippe Garner, based in London, remains the International Director of Photography. Joining them in New York are Nicholas Kilner, as Specialist Head of Sales, 20th Century Decorative Art & Design, and Matthieu Humery, as Specialist Head of Sale, Photographs.
Humery worked most recently as a specialist in photographs and contemporary art at Phillips de Pury & Company. Before that, he worked as a consultant with the Magnum photo agency in Paris.
At the luncheon, Humery explained that he would be working in several areas, including in the editing and design of the catalogs that accompany each auction. “To me, they always seem a bit like a ratatouille, with all these different kinds of images mixed together in ways that don’t create much excitement,” he said. He also answered a question I’ve always wondered about: Why some images are considered photographs, and placed in photographic auctions, while others by the same artist are considered contemporary art and placed contemporary art sales.
“Sometimes, it’s just about the size of the print,” he said. “If a print is very big, it might go in contemporary art. If it’s small, it would go into the photography auction.”
That’s kind of amazing, yes? At any rate, there is no doubt that the next big photo collection coming up for auction at Christie’s will be that of Nancy Goliger and Bruce Berman. He’s the chairman and CEO of Village Roadshow Pictures, and she’s the executive VP of creative advertising at Paramount Pictures, and as a married couple they amassed a collection of some 2,600 photographs. Now they’re divorcing, and the collection is being sold. (Go here for a story about their collection.)
You can’t just dump that many photos on the market at once without risking a drop in individual prices. Christie’s will sell it three parts: works by Diane Arbus will be auctioned in April; images by William Eggleston will be auctioned in October; and an auction for other photographers will be held in 2009. In addition, a portion of the collection is be donated to the J. Paul Getty Museum in Los Angeles.–David Schonauer