Letter of the Week: Moody Youth 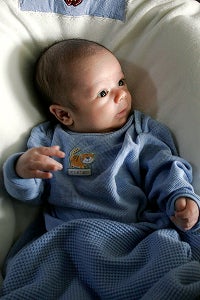 In “The Fix” in the Popular Photography December 2007 issue, in
critiquing Mr. Harris’s photo of his son (p.56), you mentioned that
it was just a little too dark for a child’s portrait, and that kids
should have a “youthful glow.” I agree that, for the most part,
images that emphasize the enthusiasm and vivacity of youth, via
highlighted photos portraying or suggesting their boundless energy
are best for children’s photographs.

But sometimes, low key photographs which suggest contemplation or
thoughtfulness, even in infants, can be effective. In my attempts at
such low key images, I try to add light to the child’s face,
especially the eyes, even thought the remainder of the image is muted
or in shadow. An example of my effort is the image of my grandson
Charlie. The subject was primarily illuminated with window
light, shot with a Canon EOS 20D, 18-55 mm zoom lens at 21 mm. , at
1/50 sec., f 3.5, at ISO 400.