Keep an eye out for the January/February issue of American Photo, which features our second annual and Annie Leibovitz (commercial work). 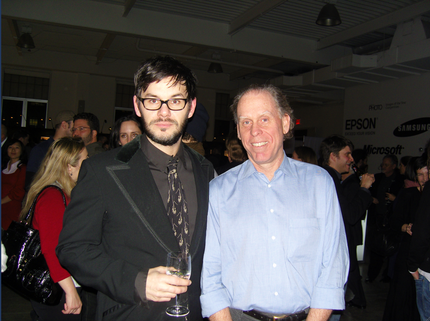 Keep an eye out for the January/February issue of American Photo, which features our second annual “Images of the Year” competition. Last night, at a special event in New York City, we honored the winners of the six categories in this year’s contest. They were: Michael Kamber (photojournalism); Chris Anthony and Adam Makarenko (personal work); Thomas Mangelsen (nature); Martin Schoeller (portraiture); Sean Salyards (student work); and Annie Leibovitz (commercial work). What you won’t find in the magazine is the name of the grand prize winner, which we withheld until last night’s gala. Now it can be revealed: the grand prize winner, receiving a ton of goodies from contest sponsors Samsung, Microsoft, and Epson, is Chris Anthony, shown here at left with American Photo publisher Jeffrey Roberts. To see his work, and all the other winning images, get your copy of American Photo asap.
–David Schonauer