_ Guest column by Michael Shaw_ Ever wonder why an American office worker might prefer to sit under his desk,... 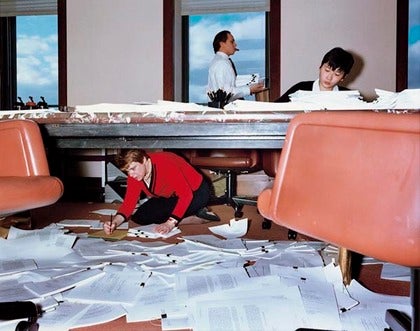 Ever wonder why an American office worker might prefer to sit under his desk, while his Japanese counterpart would do anything to not have to leave his chair? Lars Tunbjörk’s “Office” series, an artful photographic documentary of corporate offices in Japan, North America, and Sweden, seems to hold some clues.

With their static subject matter and lackluster color palette, it has been too easy for these images to be pigeonholed as studies of boredom and banality. But given the chance to spend time with them during a recent visit to Cohen Amador Gallery in New York, I’ve come to see these photos as much more than half-whimsical indictments of lifeless automatons trapped in drab cubicles and off-the-rack suits.

On closer inspection, in fact, they provide fleeting insight into the ways disparate cultures relate to restrictive spaces.