Having recently posted a blog about a cool exhibition of Frank Sinatra photos at The Shops at Columbus Circle, I was pleased when our office got advance copies of a new book called Frank Sinatra: The Family Album and a companion book called Elvis Presley: The Family Album, both published by Little, Brown and Company, out now just in time for the holiday season. Each of these volumes is designed to show the with text by people who actually knew these entertainment giants and intimate photographs 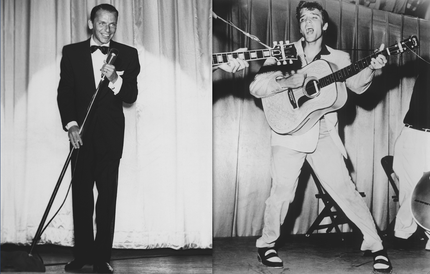 Each of these volumes is designed to show the “man behind the myth,” with text by people who actually knew these entertainment giants and intimate photographs (many previously unpublished) that show myriad moods and behind-the-scenes moments. The two titles share the Family Album theme, with snapshots that look they’re mounted on album pages and embossed covers. What’s striking is how genuine both of these men seem when removed from their pedestals, as well as the obvious charisma that made them the icons of their respective generations. But a close look makes it clear: Elvis is much more the alluring character.