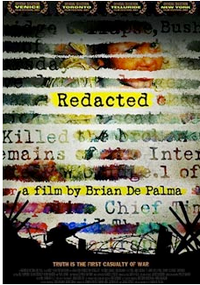 Director Brian De Palma got into a heated shouting match with one of the producers of his new film at a New York Film Festival press conference Monday (see the the video below). The argument concerned De Palma’s new film, Redacted, which focuses on the rape and murder of a 14-year-old Iraqi girl and her family by a group of American soldiers in 2006. The film is a hybrid documentary/fictional account of the event, and it makes use of home videos made by soldiers and never-published photos that De Palma says he found on the Internet. At the press conference, De Palma accused the film’s backer, Magnolia Pictures, of editing out the horrific imagery to avoid offending audiences. Magnolia president Eamon Bowles then jumps up to say that the images were cut because the people shown in the photos had not legally “signed off” on them. Replies De Palma, “How do you get releases for war photographs?” This is sticky legal ground, all right. Can the film be considered a documentary? Would the legal notion of fair use allow De Palma as a film maker to use the images without signed releases from the people shown? Most of all, why didn’t Magnolia Pictures (which is owned by billionaire Mark Cuban) think of this a long time ago? The film as already been screened at the Venice Film Festival, where it shocked audiences. De Palma says his whole purpose in making the film was to show images that the American press had “redacted.” Now those images have been edited out of the public view again. Film producers can usually figure out how to make the law work for them when they want. In this case, I suspect, they got weak knees in anticipation of the reaction of American audiences. But we are exactly the audience that should be seeing the pictures.