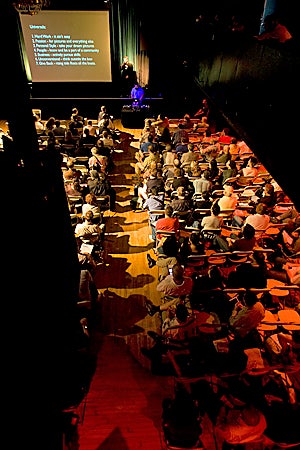 PhotoShelter‘s new “town hall” series, which premiered in New York September 14, is ostensibly designed to bring together photographers and art buyers to talk about where the industry is headed, especially as it applies to the online realm. But we all know that it’s also a convenient forum for them to introduce their new photographer-friendly stock agency (full exclusive report at popphoto.com), the PhotoShelter Collection.

And it certainly didn’t hurt their cause to include in the “roundtable” discussion Roy Hsu, a photographer and president of the Stock Artists Alliance, which is leading the charge against Getty’s announcement a few weeks ago that it would offer $49 “web use” licenses for images from all of its collections, including its top tier Rights Managed images. A number of photographers’ organizations have joined the effort to have Getty rescind the offer, including ASMP, APA, EP, and U.K. and Canadian groups.

What started off with PhotoShelter CEO and founder Allen Murabayashi gently prodding Getty and Corbis employees in the audience with “we know you’re out there,” ended up as a full-blown airing of grievances against Getty. Photographer Kareem Black, who was also on the panel, has been represented by Getty for years and said he has watched his checks “go down over the years.” “They believe in quantity rather than quality,” he complained. “Someone’s making money, but the photographers aren’t.”