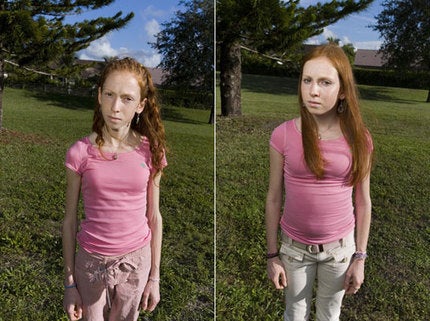 There seems to be an ever-increasing number of photography awards to pay attention to these days…but the Emmy’s is rarely one of them. Yet that is where VII photographer Lauren Greenfield was honored yesterday with a nomination for her documentary film (which ran on HBO), Thin. I was privy to a sneak-peak of the film back in November, and can say without hesitation that Greenfield absolutely deserves this recognition. The film is heart-wrenching (as you would expect a movie about eating disorders to be) but also fair and honest — refusing to simplify her subjects into either victims or monsters. Greenfield spent an incredible amount of time with these women while she was filming, staying involved in their lives long afterward and going back only after shooting the film to record the Renfrew Center (where Thin was shot) in photographs. The resulting book, also titled Thin, allowed Greenfield to reassess the situation from a new angle, giving her the time and perspective to create haunting portraits of the women at Renfrew (like the one above, of Aiva on her first and last day at the treatment center) and to include pages from their own journals. I wouldn’t be surprised to see more photographers being acknowledged for their film work in the future — but they will have to work very hard to reach the bar set by Greenfield.