A Photo Contest and A Dying Man 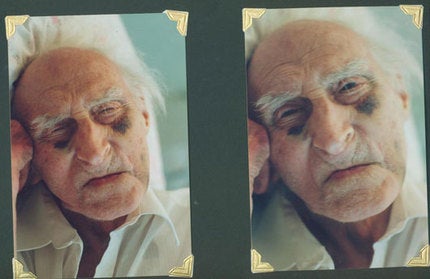 I recently have become obsessed with WNYC’s Radio Lab show (which I found by way of my long-standing obsession with WBEZ’s This American Life) and thus stumbled upon this gem of a story (scroll to the bottom story, titled “Grandpa”). Now, Radio Lab is essential the science version of Car Talk — meaning there are two guys who make science topics palatable to a wide audience through inventive explanations, witty banter, and quirky sound effects. Anyway, the shows often start very technical (talking about dendrite development or cell division) and end up somewhere a little more philosophical. In this Mortality show, they end up at a fascinating rumination on not only death, but photography’s uneasy relationship with it.

The Zagars are three generations of men living in the same house. When the eldest begins to decline, the son challenges the grandson (his son) to a photo contest to see which of them can take the “most objective” photos of the dying man. Near the end of the radio story, the father admits to the son that the whole thing was a subterfuge to make the teenager spend time with his grandfather at the end. The photos (some of which are reproduced in a slideshow) are graphic documents of flesh-swallowing bed soars and cracked, skeletal feet. They are sometimes harrowing and impressively unflinching, but also somehow tender — not exactly “objective,” I’d say.