Other artists' records for sale at auction were broken by Robert Polidori's (above), purportedly Penn's favorite of his own images. The print was also the top lot for the large multi-owner Christie's auction, selling for $396,000. 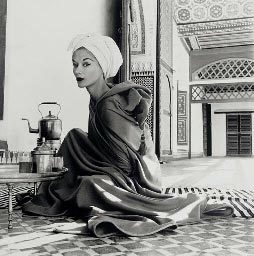 The press releases and final sale prices are in for Christie’s, as is the verdict on the first ever Horst-only auction–and the results look good. The 50 lots that sold above the minimum reserve raked in $2.5 million. The top photo of the collection, Horst’s “Mainbocher Corset, Paris 1939,” sold for $288,000 (including buyer’s premium), a new auction record for Horst. Nine of the ten top-priced images, including the “Mainbocher Corset,” were platinum or platinum-palladium prints on canvas, printed late in life by Horst as a kind of ultimate expression of his photos. Only a few such prints had come up at action before, but Josh Holdeman, international director and head of the Christie’s New York photography department, says they’d always done very well. “They’re more of an object,” he hypothesizes as the reason for their high valuations.

Holdeman wasn’t surprised to see a single-artist auction bring in big bucks, either; an earlier sale he ran for 50 of Robert Mapplethorpe’s color dye-transfer flower prints also did very well. “Auction history has proven that when you get a large quantity that is well edited, either a collection or by one artist, it puts that artist or that collection’s achievement into a neatly wrapped package that’s very effective,” he says.

Follow the link to see the top ten highest sales for the multi-owner auction.