The cameras are still up there on the lunar surface. 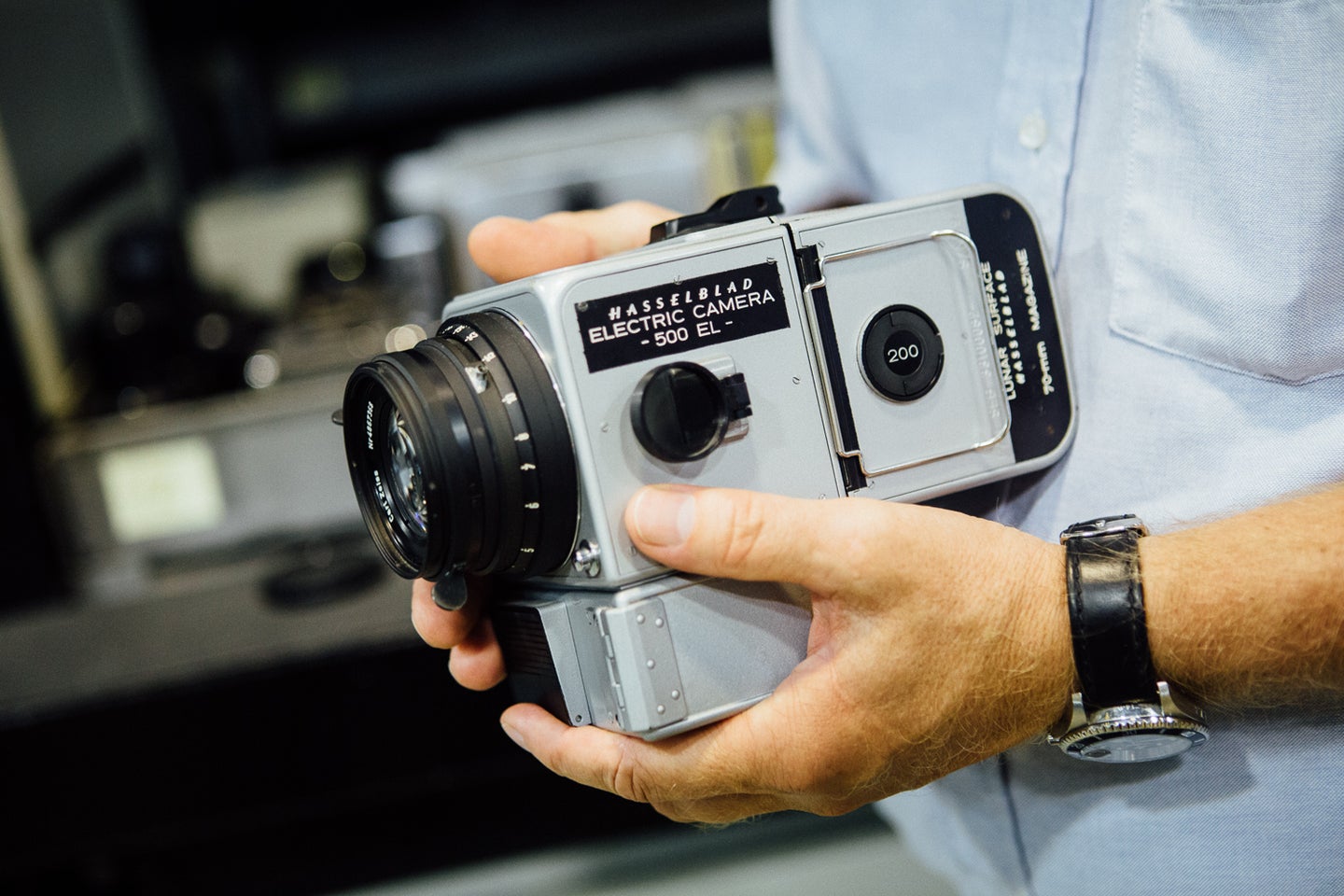 NASA sent lunar probes out to photograph the landing sites

A satellite called Ranger 7 sent the first images from the moon back to Earth via radio signal in 1964. Soon after transmitting the images, it crashed into the surface and broke for good. Several more probes followed in subsequent years, though they landed without a crash. Each probe had equipment onboard to process film, then essentially scan the images and send them back to earth.

Hasselblad cameras went to space before the moon landing

Swedish camera manufacturer Hasselblad created cameras for early space travel. In the early ’60s, the Mercury mission astronauts brought several Hasselblad 550C cameras into space. The Hasselblad was a natural choice for the job. The internal mechanisms were entirely mechanical with few moving parts, and the modular system kept film in switchable modules called “backs” that easily swapped. So, when they finished shooting one batch of film, it was easy to stow it and attach another fresh back. The original 550C bodies were unmodified.

Apollo 8 upgraded to the Hasselblad EL, which added some creature comforts

A motorized film-winding system made the EL cameras on Apollo 8 easier to use. Previous models required manual film advance, which involved turning a crank to move the roll along. The EL had a motor inside that automatically pulled the exposed film onto an uptake spool. The motor added weight and complication, but also drastically reduced the chances that the film would break inside the back and render some of the stock useless. It also cut down on the possibility of light leaks.

The astronauts shot color and black and white film

Typically, Hasselblad film backs can handle 12 or 24 frames worth of film at a time. That’s a lot of backs to lug along for the ride, however, so the space cameras used special modules that could hold up to 160 color or 200 black and white images. Kodak created special, thinner film stocks specifically for NASA’s purposes to maximize space inside the magazines. The color slide film was based on the Ektachrome emulsion, which you can buy and shoot still today.

The crosses on the lunar pictures came from a Reseau plate

A clear sheet of glass with crosses engraved into it sat in front of the film plane on one of the cameras. These precisely-created crosses gave the images scale so researchers can study them and get a sense of how large or far objects in the picture are from the point of capture.

Static electricity was a problem

Typical film cameras build up static electricity from friction as the material moves inside the camera. According to NASA, the metal components inside the body and humidity in the air disperse it before it can build up. In space, however, the glass Reseau plate and lack of humidity hindered the dispersion, which could have resulted in a spark, which is bad news in space. To remedy the situation, the film itself sported a conductive coating that funneled the charge to metal springs.

Some space cameras were black, but the moon camera was grey

Heat management is an issue when there’s no atmosphere. While early space cameras were black—they weren’t modified from their commercial designs—the moon cameras were silver. This prevented the camera from absorbing too much heat and possibly damaging the film.

They didn’t have a typical viewfinder

You can’t exactly put a viewfinder up to your eye to look through a camera in a spacesuit. Instead, the astronauts used distance scales on the lens to focus and basic guides to frame their shots. The wireframe stuck out from the side of the camera to show the astronauts what would be in the picture.

Liquids don’t last long in the vacuum of space, so the camera’s moving parts needed special lubrication that wouldn’t disperse immediately outside the craft.

If you want to go shooting like an astronaut, you can download the NASA photography guide here and try out some of the techniques. It’s both kitschy and educational. The Johnson Space Center has also scanned many of the moon images to Flickr. If you want to see some of the more iconic space images, you can check out these high-res versions scanned by the Project Apollo Archive.

The cameras are still on the moon

In order to reduce weight on the trip back from the moon, Apollo astronauts jettisoned everything except the film backs before returning to earth. The bodies and lenses are still on the surface.