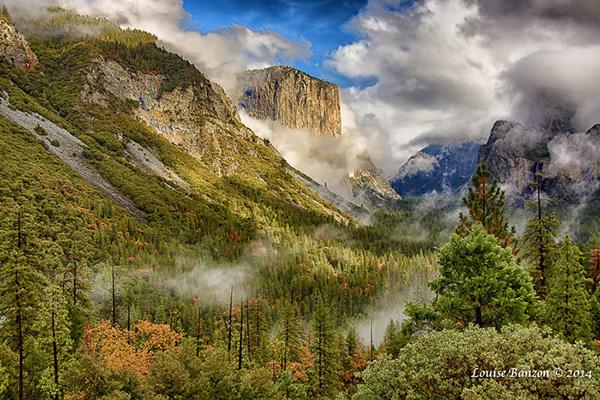 The trek concentrated on the Yosemite Valley which is about one mile wide and seven miles long. So much to see and so little time. As usual, Michelle made the most of the time by running a tight ship and scheduling trips to many of the most iconic locations for photographs. The trek for me started in Fresno when we boarded the bus for the ride to the Yosemite Lodge at the Falls. The morning started out overcast and dreary and wet. As we entered the park the valley was filled with fog and the occasional break in the clouds, not the best conditions for photography, until…

We came out of Tunnel View to see beautiful blue sky with wispy white clouds hanging in the valley and over the peaks of El Capitan and the Cathedral Peak. The Mentors, Tom Bol and David Tejada both went into action and gave us suggestions on how to approach shooting the scene before us. They also went up and down the line ready to provide assistance to anyone who asked. This was an opportunity to extol the virtues of signing up for a future trek through the Mentor Series.

The evening of the first day the entire group returned to the Tunnel View to photograph the sunset. By now the weather had become more overcast and not quite as sunny as earlier. The clouds were hanging down in the valley and the sky was rather washed out. Then the reddish, orange glow of the sun reflected off the face of El Capitan. The sunset photo session capped off a very successful first day and that evening we tried photographing the stars while light painting the canopy of trees surrounding the small clearing we found in the forest near the lodge. With David Tejada & Tom Bol at the controls everyone came away with some great shots.

The next morning we began the day with a trip to photograph the sunrise at Cathedral Beach with breakfast to go. It was misty along the river and presented some nice reflections of El Capitan in the very calm river. The other direction provided nice views of the Three Brothers reflected in the river as well. The best part of such a trip is discussing your favorite piece of photo gear or exchanging favorite techniques with other photographers.

We went back to the Lodge for lunch, down loading, and the first digital review. My favorite part of the Trek is hearing the Mentor’s comments about my images and seeing the other’s photos and comments. After the photo review we departed for Valley View to photograph the sunset. Again, the weather cooperated and the river was smooth as glass. As the light turned from yellow to orange to red it lit up the face of El Capitan producing a nice golden glow in the water surface. Again, 24 photographers, 24 different perspectives, all great photos.

As a bonus we decided to try some Astro Photography in the evening. We took a short walk to the meadow near the lodge and learned a few things about focusing on the foreground and stars. Great views of the Milky Way with the walls of the valley framing the sky were the result. Lots of traffic on the road and hikers coming down the mountain trail made for some interesting light streaks. This is one technique I will try again.

We took our lunch on the road and stopped in the valley to photograph the lower Yosemite Falls and the stream below. The rock climbers were waiting for us in the campground area when we arrived. Between their prep and explanation of techniques and the running commentary from Tom we not only got some nice detail and close-up shots of the climbers but gained an appreciation for their sport.

After eating lunch while sitting on a log in the parking lot we headed up to Glacier Point for the sunset. With clear skies and not much of a breeze you never know how the sunset will turn out. As the light changed to a slight yellow a few thin clouds drifted over the top of Half Dome. A nice red glow illuminated the underside of the clouds and just before we lost the light Half Dome took on a nice reddish tint.

The final morning we were off to El Capitan Meadow to photograph the sunrise. The frost made for some interesting leaf and foliage shots. Even though we were here a few days prior, the shots I captured looked very different. One of my favorites of the trip was the frosted wild flower with a reflection of El Capitan in the background slightly out of focus.

The final photo slide show was great and a highlight of the trip for me. As usual there were a very talented group of photographers on this trip and each learned just a bit more each day. I highly recommend you take the opportunity to go on a future Trek. Michelle kept us on time and packed the schedule to maximize the photo opportunities. Many thanks to Michelle, Tom Bol and David Tejada for making this an educational and memorable trek.