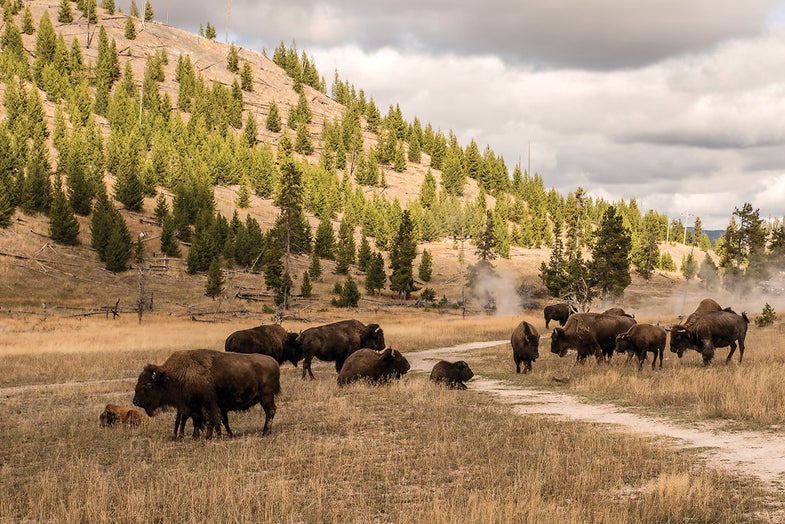 To even out the dark foreground and lighter background in scenes like this, Ericson has learned to expose for the highlights, set relatively high ISOs (i.e., 400 or 600), and then dial up shadow detail when editing. Wayne Ericson
SHARE

“One of the things that attracted me to this Yellowstone scene was the trail that wound through it,” says Wayne Ericson, a retired college administrator from Bloomington, Illinois. He noticed it during a Mentor trek last September while shuttling between the Yellowstone’s Upper and Lower Geyser basins. At first the path worried him: It cut through the scene vertically and divided his composition into two. Not good. “I figured if I could reposition myself to get the path to run diagonally, coming in from one of the corners to lead a viewer’s eye, I would have a better picture.”

That did the trick. Not only did the resulting S-curve knit the scene into a unified composition, but the trail’s line now draws the viewer’s eye back to the hillside beyond, where a descending slope mirrors that leading line in the foreground.

As a six-time Mentor Series participant, Ericson has learned a lot about composing landscapes while also keeping them sharp. On one trek, for example, he realized that he couldn’t trust the ancient truism about handholding at shutter speeds no slower than the reciprocal of the lens focal length (e.g., 1/100 sec when using a 100mm focal length). “My pictures would be sharp, but not sharp enough,” says Ericson. Now, taking advantage of today’s cameras’ improved image quality at ISO 400 and 800, he’ll set a shutter speed of 1/200 or even 1/400 sec with his zoom at 100mm and the results are clearly sharper.

“I’ve also learned that I improve my odds of sharpness, when I shoot in my camera’s continuous advance mode, and pop off two or three exposures of every scene. Usually, one of them will be the sharpest,” he says.

Composing landscapes, though, is Ericson’s forte. “It’s about far more than the Rule of Thirds,” he explains. “It’s also about visually coordinating shapes, lines, colors, and fields of light.” All these variables come into play before he reaches for the shutter release.