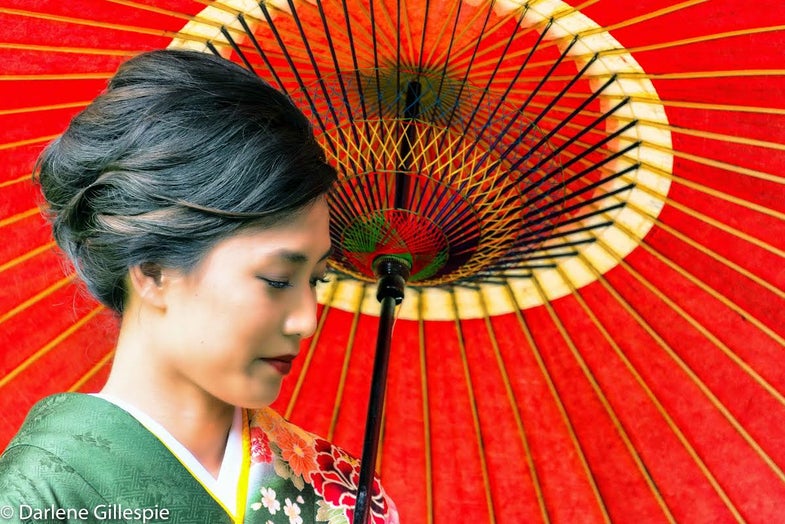 One of the greatest things about the Mentor Series Treks for me – besides the fact that you get to hang out with other people who are as passionate about photography as you are – is the way it allows you to see a familiar place in a completely new and interesting light. Our trip to San Francisco reinforced this to me tenfold under the mentorship of Tom Bol. I have explored the city with my camera before, but with the guidance of our mentor I felt as if this was the first time all over again. Over the course of 3 days we covered the gamut of subject matter – from the iconic Golden Gate bridge to portraits in graffiti-adorned Clarion Alley to towering redwoods at Muir….and much more in between!

Our first day opened with a visit to the Japanese Tea Garden – a beautiful location in its own right, but made even more interesting with the addition of a geisha model arranged by the trek organizers. As a portrait photographer this session was perhaps one of my favorites as I had the chance to create images of the Tea Garden with the best possible human context. Most people go to the Tea Garden and must make do with other tourists as their human element – having a traditional Japanese model made our images much more meaningful.

After our session at the Gardens we went on to one of the focal points of the trek – the Golden Gate Bridge. For the next few hours we shot the Bridge from every accessible angle – Fort Point, Baker Beach, Vista Point and wrapping up the day at the Marin Headlands. Each point adds a different perspective on the bridge and its relationship to the city. Fort Point allowed us to get up close, see the very joints and millions of rivets of the bridge while also affording us views of windsurfers riding the waves around the gigantic steel and concrete bases of the towers.  Baker Beach gave us the long shot of the bridge from the west as it was lit by the sun setting through layers of fog. Vista Point gave us the head on view of the traffic moving on the bridge between the tower structures while the Marin headlands offered a final dramatic aerial perspective (albeit with a brisk wind that made long exposures challenging).

The second day was focused on the city itself. We spent the morning in Chinatown and were granted the time to freely explore the area as it transitioned from empty early morning streets to a buzzing hive of activity. Capturing street scenes is something that I enjoyed practicing here – every corner and alley was another opportunity to create something interesting. The latter half of the morning was spent in Clarion Alley – a narrow street decorated with murals on either side. This was the perfect backdrop for our next model, who met us there to help us create portraits in this colorful location using off camera flash under Tom’s guidance.

After a review session, we headed back into the city at dusk to capture images of the Crooked Street at Russian Hill – lit with the lights of cars as they slowly wound their way down the steep narrow street, a perfect recipe for traffic trail images.

The final day saw us departing at sunrise for the Muir Woods National Monument – a fantastic decision as it allowed us to explore this majestic redwood forest on our own for almost an hour before the day’s crowds began streaming in. Our group came away with many unique takes on this area – from towering canopy shots of these ancient trees to macro shots of the rugged texture of the redwood itself.

Throughout it all, Tom was the consummate teacher and guide and freely shared his technique, experience and recommendations. His reviews and critiques were invaluable and he gave us insight into composition theory and creating a great story from our pictures.  His mentorship showed in the results of our final slide show before we said goodbye. Indeed, it says something when – despite the familiarity that exists with images of San Francisco – each member of our group captured some genuinely unique and interesting images of this City by The Bay.