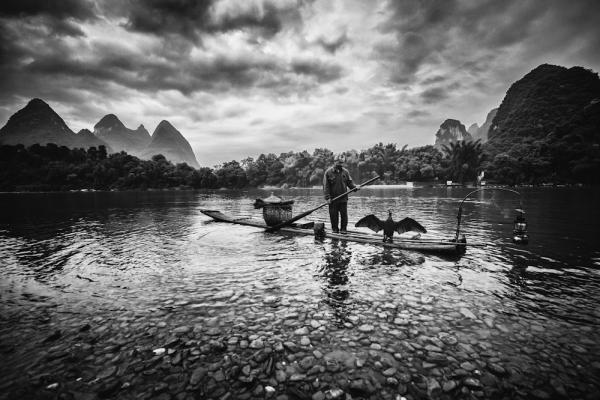 The China trek was a decisive test of endurance for the 44 trekkers that participated in May. Hobble together four internal flights (not counting a 14+ hr. flight just to reach Hong Kong), numerous bus rides, two cable car hauls, a river cruise, two days of rain, humidity at 80%, a flu-like bug that attached itself to about half of the trekkers and what is the result – simply stunning photos. With the help and humor of mentors Bill Durrence, Reed Hoffmann, and Corey Rich, our group rose above the challenges we encountered in this country of 1.3 billion people, very few of whom speak English.

Anxious to start shooting, the first morning of the trek in Hong Kong involved a stop at the fishing village of Tai O on Lantau Island, followed by a visit to the largest outdoor Buddha statue in the world, and then it was off on our first plane ride to Guilin. From Guilin, we headed to the water for a leisurely cruise up the Li River to Yangshuo. Despite hazy conditions, the group entertained themselves by shooting each other, as well as the rural life we encountered along the river.

Once at Yangshuo, our local guide Raymond suggested we go for a group “foot massage” – cheap at 100 Yuan ($20) for one hour. Fourteen trekkers opted for this Chinese specialty, where we were ushered into one room with chaise lounges, followed by the attendants with their giant buckets of steaming hot water that they placed at our feet. After nearly scalding our toes, the masseurs marched away with the water and returned to exert about 200 lbs. of pressure kneading and prodding our feet and legs.

Up before sunrise the following day, we made our way to the Li River in the dark and boarded rafts made of sewer pipe complete with rickety chairs and quietly navigated the waters to a secluded area on the river. It was here that we had the chance to photograph the fishermen, balanced on their simple bamboo rafts lit by a single lantern, complete with cormorants in stride. Dawn breaking over the water, with the distant mountains in the background, provided a surreal moment that all of us appreciated. Later in the morning, it was off by plane to Chengdu.

Chengdu is most noted for its panda reserves. We devoted most of the following day to the Ya’An Bifengxia Panda Base, located two hours from the city center. Photos ops of these delightful creatures were plentiful; it was easy to compose a background that looked natural and not zoo-like. Many of our trekkers paid dearly for the chance to hold a panda for all of 1 minute, or have their picture taken with one. The funds go to support Panda Base.

Another plane ride took us to Hangzhou, and from there, we headed to Huangshan Mountain (known as Yellow Mountain, a UNESCO World Heritage Site). The trip required we downsize our luggage, as we would learn that getting to the hotel was first a healthy cable car ride, followed by a 40 minute walk to the hotel, which consisted of steps, either up or down. The entire mountain was steps, either up or down, so by the end of the two days there, everyone had well-toned or achy calves. Now the idea of a foot massage was sounding darn good. Unfortunately, we had drenching rain for most of the visit, but it made for some beautiful photos when the clouds would briefly part and the cobalt blue tips of the mountains would peak through the clouds. Our fearless leaders wasted no time in developing some hikes, and those brave enough followed, covered in rain gear or toting umbrellas.

The rain followed us down Yellow Mountain, and on to the villages of Hongcun and Nanping, used as locations for the movie, Crouching Tiger, Hidden Dragon. By now, all had become accustomed to the weather, and with the encouragement of Bill, Reed and Corey, we continued to slog through these amazing ancient cities, finding many locals watching us with curiosity, and a few willing to be photographed. Highlight of this day had to be our lodging in the countryside, the exquisite Fairyland International Hotel, easily rated 5 stars after our damp and musky stay at Yellow Mountain. There were no complaints from any women trekkers about the sleek oval tubs sitting in the middle of the enormous bathrooms at Fairyland. The sleek, oval tub in the enormous bathrooms at Fairyland, with views out over the lake, was nothing short of heavenly.

Our final flight the following day took us into Beijing very late due to plane delays. We arrived at the hotel bleary eyed at 2 am. We had the morning to sleep in, review images, and submit for the final slide show. Some of the trekkers took advantage of the fact we were around the corner from Tiananmen Square and the Forbidden City, and opted instead of reviews to pay a visit to this critical piece of China’s history. As always happens with the treks, the final slide show images were amazing, worthy of many “ohs” and “ahs”, and a testimony to the hard work on everyone’s part to be creative in capturing our China experience despite some challenging moments we all endured.

Then it was off on our last two hour bus ride to see the Great Wall at Jinshanling. But, not before a lunch stop en route at none other than McDonalds. Trekkers were craving for a Big Mac; we converged on that fast food joint like castaways that hadn’t eaten in a month.

The Great Wall – what a fitting end to a remarkable trip, to stand on one of the great wonders of the world. Trekkers divided and conquered, some heading east on the top of the wall, some west. Either way, the views at sunset were spectacular. It was one of those experiences that are less about the photo and more about the moments that stay in your heart and mind. These moments don’t fade and need no color corrections.

These days in China have enriched our lives, as only travel can. Thanks to Michelle for putting together a most remarkable trek. As we settle back in at home and start editing images, we should each pat ourselves on the back for not only having made the journey, but for expanding our photographic abilities.