IsItNude.com Can Automatically Tell If Anyone Is Naked In Your Photos 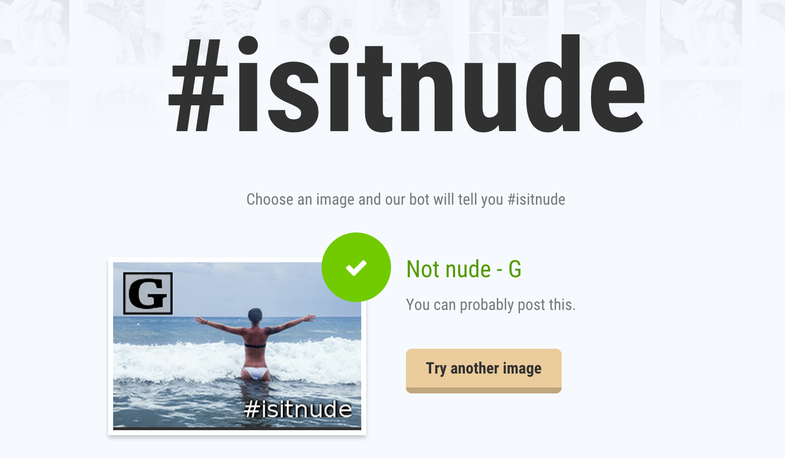 Computers are getting very good when it comes to recognizing things in photos. Not only can they tell how old you look in a given photo, but they can also tell if you’re naked. IsItNude.com was built specifically to identify naked people (or partially naked people) in photos automatically.

The site belongs to a company called Algorithmia, a research company that has actually been doing some interesting work in terms of image recognition. It works, in large part, as you’d expect, trying to identify swaths of skin using indicators like color and shapes.

The Isitnude.com site exists almost completely as a proof of concept outlet for the company and a way to make their technology known. The overall point of the tech is to help sites and networks identify inappropriate content that they hope to avoid. Facebook, for instance, has a policy against nudity in photos uploaded to the service, but they have to maintain a huge number of humans checking flagged content to try and keep what they deem “inappropriate” out of people’s newsfeed.

There has been a fair bit of debate surrounding technology like this and it seems warranted since it’s such a complex issue. In the wrong hands, for instance, a similar tech, when combined with facial recognition software, could be used to troll the web for nude photos of a specific person. And if we start relying heavily on automated algorithms to decide what is and isn’t appropriate for posting online, that also sounds a bit scary.

For now, it’s interesting to mess around with sites like IsItNude.com just to see how adept it is. Since it relies heavily on skin tones, it can’t figure out that people are nude if they’re also in black-and-white. But, demand for tech like this will continue to grow as people most more and more content online. It will be interesting to see just how smart it can get.