Before you bring the angry comments, at least hear me out. 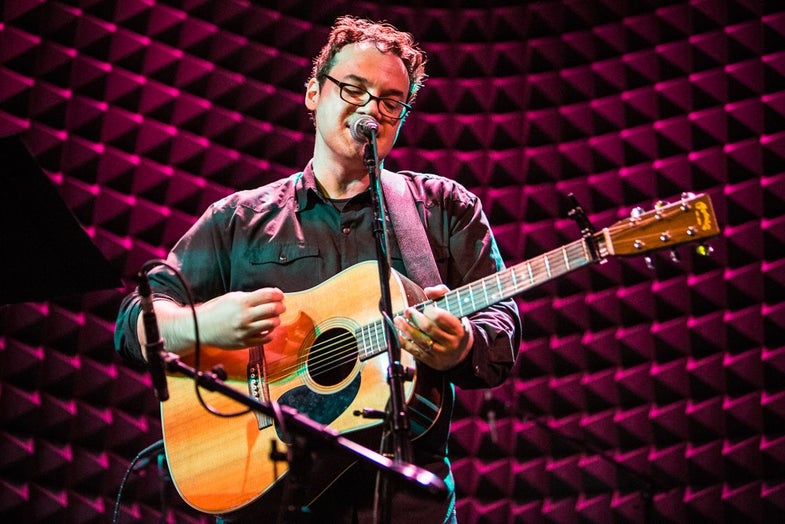 Note: This is an editorial and represents the opinion of the author, and not necessarily Popular Photography as a whole. You don’t have to dive very deep into the internet to find arguments about the issue of camera bans at concerts. Zooey Deschanel’s adorable indie rock band, She & HIm, asked that people please stop watching the concert through their phone cameras. Venues, festivals, and even artists are putting restrictions on the kinds of cameras allowed into live music events. And let’s not forget about the “three songs and out” rule that’s been applied to concert photographers for decades. The arguments against the camera bans are compelling. Why shouldn’t people be able to express themselves artistically? We paid for these tickets, why shouldn’t we be allowed to bring our cameras with us? Who is it hurting if we take awesome pictures? Why are all these camera phone schlubs allowed to snap away when people with “real” cameras are subjugated? All valid questions. But, in the rage of the internet, there are some subtle points that tend to get lost. They’re worth considering, and thinking about them might actually help you out next time you’re trying to bring a camera into a venue.

In the early parts of my career, I was working for Blender magazine, a general interest music magazine that covered everything from hip hop, to heavy metal, with healthy portions of pop music thrown in. I was working online and shooting a lot of live music galleries for them [of course, the company has changed hands so many times that the old Blender.com content has long been lost, leaving the site as little more than a placeholder now. Sad]. So, I spent a lot of time at concerts with cameras in my hands. I still do it today. Thinking back to those hours spent shooting, there are certainly a few reasons I can imagine wanting to ban some cameras from the show. I’ll lay them out for you here. Or, you can just skip these next parts and go right to calling me an idiot in the comments.

One evening, I was shooting at Madison Square Garden for a Matisyahu and O.A.R. concert and I got to talking to one of the bouncers before the show started. He was there to enforce the three-song rule and started telling me where it had come from. According to him, it had started decades before when Sting began seeing photos of himself performing. Shots from the early part of the set looked great, but as the night wore on, he got sweatier and more haggard, giving a less-than-ideal picture of himself. From there, according to this seasoned bouncer, he started giving photos three songs, then throwing them out of the pit. Other performers loved the idea and it caught on.

I don’t know how true that actually is, mind you, but it’s a totally believable story, and an understandable one in my eyes. For many musicians, image is a big part of their show. Look at what happened with Beyonce at the Super Bowl last year. Some unflattering pictures of her got out and went viral. Some would say they only got so popular because she tried to cover them up, but from my perspective, she only tried to get them taken down once the Photoshop internet fiesta had begun. For Beyonce, it was bad for business to have unflattering pictures out there.

Part of the issue with the Beyonce photos (from her standpoint) was that they were taken by a hardcore pro on excellent gear. Look bad in a smartphone shot? Blame it on the phone. Most people who see it will. It’s an excuse we use all the time. If a top pro gets you looking bad with $13,000 worth of camera gear, you have no one left to blame but yourself and maybe your personal trainer. Same goes for a fan with an expensive camera. Many, many artists build a big part of their image on how they look (for better or for worse) and they’re trying to protect it.

This same idea carries over to video as well, where it actually expands a little. Not every performance on every given night is going to be perfect. In the live music settings, strings break, wrong notes are played, sound gets wonky, and a whole assortment of other things tends to happen. That’s the nature of the beast. When people start recording video of every show on their nice cameras, those mistakes get preserved and broadcast. Not only that, but they’re presented out of context for others to watch online. Maybe the drummer breaks a snare drum head in the middle of a song, or the guitarist gets the neck of his guitar whacked, throwing things out of tune. That might not come across in a Youtube video presented on its own, and that makes the artist look bad.

Not to mention the fact that your recording might look great, but the sound will definitely not be that great. It’s like if someone were posting your pictures online, but instead of sharing the actual files, they were using their camera to take a picture of your camera’s LCD screen and then sharing it that way with your name plastered all over it. Not flattering, right?

Running a live music venue is a tough gig. Sure, it’s one that’s associated with a wide variety of unsavory characters, but it’s not an easy job. It becomes more difficult as your customers increasingly bring in delicate equipment that costs thousands of dollars.

If you’re trying to get a shot of the band for your Facebook page, and someone crowd surfs onto you, busting up your gear, are you just going to accept the fact that it was your fault? You might. But, you might also go after the venue. It’s happened, probably more times than you’d expect.

Past that, what if a waitress carrying drinks spills booze on your camera? What if you set it on a bar and a venue employee accidentally knocks it to the ground? Sure, they can post signs and make you sign waivers, but if a patron decides to try and recoup some of that loss at the cost of the venue, it’s a process that requires a time and monetary commitment.

Then there are the bouncers. I’ve long understood why the bouncers can sometimes have contentious relationships with the photographers, even the ones in the pit. Not only are they trying to protect the people in front of the barrier, but they also have to maneuver around you behind the barrier. I’ve had bouncers save me from a clobbering on several occasions. We’re not making their lives easier, and their job can be a dangerous one.

The other people at the concert

Of all the arguments in favor of camera bans, this is the most well-represented. Chances are, most of the other people at the concert don’t care about photography. They don’t care about DSLRs. And they definitely don’t care if you get that perfect shot of the Lumineers for your Facebook page.

We’re photographers and we understand that when we get behind that viewfinder, the shot becomes the most important thing. And for every courteous photographer who picks a spot and makes the most of what they have, there will be another shooter who’s totally fine with getting in the way, pushing to the front, or worst of all, blasting a flash at the band or the fans while they’re trying to partake in a show.

If you’re using Live View, your screen is bothering everyone, just like all those smartphone users out there. If you’re using your eye-level finder, you’re making yourself oblivious to the world. That might be fine if you’re watching James Taylor, but if you’re at a rock or even a pop concert and a crowd surfer drops on your head, you’re going to have a bad time.

And worst-case unlikely scenario, you could easily bash someone’s head open with a big camera and lens. There are very few people out there who would ever consider doing so, but crazy things happen at concerts.

So what’s the answer?

At this point, I should make it clear that while I understand the camera bans put in place, I don’t necessarily agree with them. I think there is a balance that can be struck. Maybe it makes sense for larger venues to set aside an area for people who want to take photos. That way, you won’t get the best spot, but you also won’t be much of a liability or a distraction for everyone else. I don’t even think it would be out of the question for a venue to sell photo passes, as long as they don’t make a rights grab for the photos. After all, they are spending their resources to help protect and accommodate you.

At small venues, this usually isn’t even a problem. Some folks just need to realize that bringing your camera into the Taylor Swift concert and getting good stuff is probably pretty unrealistic. But, head to the local coffee shop and you’ll likely have no one hassling you. Hell, if your stuff is good, you might end up selling some photos to the venue or the talent.

Press passes, for the most part, aren’t that difficult to get if you’re willing to put in the work and accept the fact that you can’t start at the top. If you have a decent portfolio of live band stuff you’ve built around smaller acts in more lax clubs, you can often reach out to media folks at labels and request a pass. You’ll still have to pay to get into the show, so don’t expect to get in for free, but they may just let you shoot. That’s what you were after anyway.

I know I’ve made some of you very mad, and that’s fine. But, the fact of the matter is that you’re going to a concert with your camera, the band isn’t playing your photo shoot. The rules still don’t make much sense and need to be standardized a bit, but I would honestly never expect to be able to just walk freely into a giant concert with all my gear and walk out with stuff worth keeping unless I had press access.

As gear evolves, the rules will have to go with it. Does a Fujifilm X100s fit in the same category as a camera with interchangeable lenses? Probably. What about as phones get better cameras? It’s something that’ll have to be addressed. But for now, the vast majority of non-enthusiasts put DSLRs and mirrorless cameras in the same category.

So, while I think the right to photograph should be cherished and protected, we have to realize that we’re not on our own turf at a live music venue. There are rules, and getting angry and indignant about them won’t fix things. Trying to be sneaky and get around the rules won’t fix things either. Reasonable discussion and hard work are the best paths forward. As they usually are.

Editorials
How to
Live Music
Rock And Roll
Rock Photography