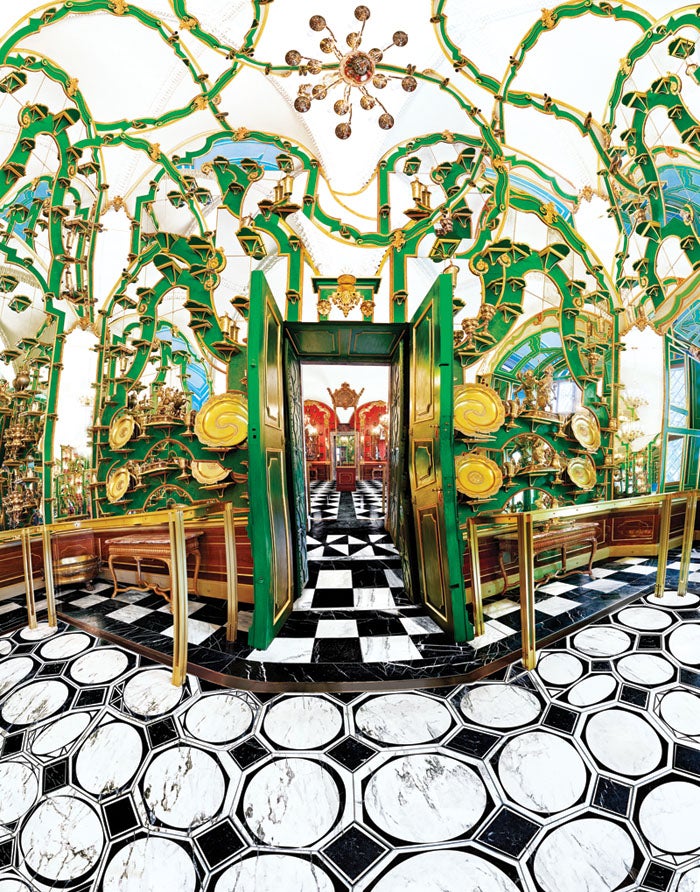 Venables shoots the whole room from a single perspective. She prints her photos, then assembles a sketch (top); as her retouching progresses, her image begins to come together (above). She works on a Mac Pro with 2 x 2.26 GHz Quad-Core Intel Xeon processors and 16GB RAM, with an NEC Multisync LCD 2690 monitor for color and Apple Cinema Display for toolbar panels, plus a Wacom Intuos 3. Raïssa Venables
SHARE

In Her series “All That Glitters,” Raïssa Venables takes what she calls “excessively opulent” spaces and uses a combination of photographic technique and imaging software to make them even more so. The rooms become surreal versions of themselves­—the real thing taken to an extreme.

Her process begins with the capture, and she always shoots in the highest resolution available to her. This image was shot with a Mamiya RZ and 50mm lens on Kodak’s 160 VC medium-format film. (When she has access to a medium-format digital back, she shoots with that instead.) Venables sets up her tripod, then pivots the camera around the room, capturing everything from this vantage point to assemble into a mega-panorama. And she brackets, big time—not only for exposure, so she has access to as much highlight and shadow detail as possible, but she also brackets her focus so that all components, near to far, stay sharp.

When she gets her film back, she scans it on a flatbed scanner and makes work prints of every frame. She prints out each frame, then labels the back of each with a numbering system that lets her keep track of them all. With these ready, she makes her first “sketch,” a mock-up of her image, cut with scissors and assembled with tape, that will help her set up her composite in Photoshop.

Once Venables is happy with her sketch, she makes new high-res scans of her photos in an Imacon Flextight film scanner. Each individual file is about 100MB in 8-bit mode; the final image shown here contains a total of 17 scans.

Next, it’s time for Photoshop. She typically begins by opening the first image and expanding the canvas around it to the approximate dimensions she plans for the final print. Because she wants this to have a nearly life-size relationship to the actual room, she measures an element in the foreground and bases her print size on that. In this case, she noted that the tiles were each about 8 inches wide, which ultimately made for a 79×62-inch print.

With the images laid out in Photoshop, she brings them together and gets rid of the seams. Venables relies heavily on layer masking for this, and she makes a lot of use of the Transform tool as well as a bit of warp.

Her imagination takes over next. In this picture, the room’s vaulted ceiling was plain white, but she continued the green detailing all the way up to the top. She copied and moved areas of the room, rotating and erasing at will. She felt there was too much white on the floor, so she added black octagons by making a selection and using an Adjustment Layer to make those areas black.

This image took about a month to composite, though sometimes she works on one piece for a week and then switches to another. She considers the process like painting—except, she says, everything in the room makes up her palette.

About the Photographer:
An artist and university professor, Venables has three degrees: a BFA from the Kansas City Art Institute in ceramics and sculpture, an MFA in photog-raphy from Bard, and an MPS in digital photography from the School of Visual Arts, where she also teaches. She’s been creating strange spaces like this one for more than 12 years. Venables has exhibited her artwork internationally. Her images are held in public collections in the United States, Switzerland, and Germany. More images at raissavenables.com.