How the Pros Shoot HD Video with SLRs

We can learn a lot from professional cinematographers. 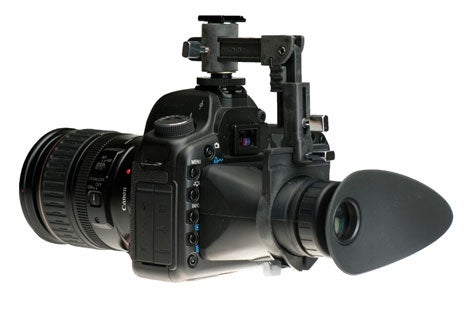 Last year, Popular Photography reported that DSLR video was coming as a serious tool for fllmmakers. Today, HDSLR cinematography, as it’s known in the industry, is here. And not just in independent productions: DSLRs are being used to shoot broadcast television and feature fllms. The season flnale of Fox’s House M.D. was shot using the Canon EOS 5D Mark II.

The good news about HDSLR: You have a platform for stunning cinematography. And you capabilities fllmmakers never had before, such as the ability to shoot at ISO 51,200, where only night vision could go before.

The challenges? While lenses designed for DSLRs are extremely fast and sharp, pulling focus—keeping your subject sharp when the camera or the subject is moving—can be a nightmare. The H.264 codec, the flle format Canon uses for recording movies on fiash media, can bite you with compression artifacts. Neither the viewflnder nor the LCD lets you adequately see what you’re shooting. And compared with motionpicture cameras, the controls are far from user-friendly.

But with new techniques and accessories, cinematographers have overcome such problems. You can, too. For instance, you can mount your DSLR on a cinematography rig, use an iPhone to pull focus remotely, drag your footage into the timeline in popular editing tools such as Adobe Premiere (included with Photoshop in the CS5 Production Premium Suite), then add some film grain in Adobe After Effects (also in CS5).

The most ambitious use of HDSLRs so far was the season finale of House, which aired May 17. While most network TV shows are shot digitally, with HD cameras such as the Sony HDC-F950, House typically is shot on 35mm Fujifilm stock, using a 16×9 3-perf format with Arricam LT and ST cameras.

“The season finale was shot in an incredibly tiny set, a collapsed building,” says House cinematographer Gale Tattersall. “We had no room to work. We shot for three or four days on our hands and knees, and eventually on our bellies. The starting point for me: What’s the right camera for the job? The idea of dragging conventional cameras in there with heavy support equipment was absurd.”

Tattersall got his first taste of DSLR cinematography while shooting a commercial for Canon Japan on the Universal back lot. “They asked, ‘Can you shoot it on our 5D Mark II?’” he says. “I thought we must be out of our minds, shooting a full-fledged commercial on a still camera.”

However, Tattersall discovered it offered a unique capability no film camera could match. “You can achieve incredibly shallow depths of field because you’re shooting on so much more real estate than you would if shooting 16×9 on 3-perf,” he says.

“We wanted to put House into his own head space, his own world. We were able to shoot in our regular hospital sets and throw the backgrounds completely out of focus. It was something you couldn’t achieve any other way, especially given that the Canon lenses we used are so fast, f/1.2 and f/1.4.”

And a DSLR’s small size makes a huge difference. “We shot a massive amount handheld because of the beauty of the image stabilization built into lenses such as the 70–200mm. You can get a rock-solid shot,” says Tattersall. “And you can squeeze three cameras into the space that would normally be taken up with one 35mm video camera on a dolly.”

In shooting the House finale, he and his team used three light Sachtler fluid heads designed for camcorders. Redrock Micro supplied them all the support equipment to mount the 5D as a movie camera: rods, matte boxes, and a mount for an external monitor. This allowed the director and script supervisor to see the video as it was being shot, Tattersall explains— this would’ve been impossible using only the camera’s LCD or a viewfinder eyepiece.

“There are problems that are good to avoid,” says Tattersall. “If you do very fast whip pans, you get image distortion. They call it the rolling-shutter effect or the jello effect.”

One thing you can’t avoid, only mitigate: compression artifacts. “H.264 is highly compressed, so you can see aliasing and banding in gradated tones,” Tattersall says. “But if you apply a little bit of film grain [in postprocessing], which I tend to do on any digitally shot picture to get a cinematic feeling, it usually goes away.”

Not all cinematographers prefer the full-frame 5D Mark II. Price is Right camera operator Quin de Varona, for example, is using the Canon EOS 7D for his next indie film project. “It’s more Zacuto rigs for handheld shooting (after all, he works for the company). He also mounts his DSLR on a heavy-duty Sachtler Video 18 tripod or a lighter Manfrotto 501 head with a Sirui M2204 carbon-fiber tripod.

“I generally pull my own focus,” says Lynch. “If I’m shooting with a crew or doing narrative work, I use a Zacuto Z-Focus and Z-Finder. But if I’m trying to be stealthy, or if weight and space are issues, I just use my hand on the lens.”

With lenses, speed, accuracy, and silence matter. Lynch generally uses a set of fast Zeiss ZF-series primes ranging from an 18mm to 100mm, which on the 7D run the full-frame equivalent of about 28mm to 160mm.

“I use Arsat 35mm and 80mm f/2.8 tilt-shift lenses for special shots and for interesting lens flares,” he adds. Cinematographers traditionally record sound with an external audio recorder. “I think every DSLR has horrible sound. I wouldn’t recommend using the audio, except for syncing purposes,” says Lynch. “For outboard sound I use either a Zoom H4n or a Zoom R16 depending on how many audio tracks I need.” And he uses Sanken COS-11D wired lavalier microphones, a Lectrosonics wireless system, or a Sennheiser 416 boom mic.

But shooting with a DSLR isn’t about the sound—it’s about the picture. Iron Man cinematographer Matthew Libatique shot an indie feature using one. He had so little light at some locations that he thought it was obviously the right choice, thanks to the ability to crank up the ISO.

Still, most cinematographers find traditional motion-picture cameras much easier to handle, so they’re putting their DSLRs to other uses on movie sets. Mauro Fiore, for example, says, “I used the Nikon D700 on the set of the A-Team for color reference.” He uses it to shoot stills to send the film lab for color correction of dailies, the day’s work on motion-picture film.

Denis Moran, who recently shot second-unit camera for Marvel Studio’s Tron, slated for 2011, voiced a worry shared by many other cinematographers: “It will get you into places you couldn’t otherwise shoot. But, just because you can handhold it doesn’t mean you should. My concern is we’ll see more bad cinematography from inexperienced operators.”