You Can Do It: Live View

Shooting a rock club can be totally awesome.

Are you ready to rock? At concerts, the raw excitement often inspires an audience to pull out their camera phones and snap away. Concert pictures that really seem in the house, though, are far from snapshots. As the house photographer for Club Harry O’s in Park City, UT, I know.

Your highest hurdle: lighting. The color, intensity, and direction of stage lights change during every number. Worse, clubs can be hopelessly dim. Some nights, dialing in 1/60 sec, f/1.8, and ISO 3200 still leaves you 2 stops underexposed.

The best solution? Off-camera flash. Hanging radio-triggered strobe units in clubs can be easy-they often have balconies, exposed rafters, and light towers for just that purpose.

Not an option? Have a friend hold a wireless flash from the floor or balcony. You can buy radio flash triggers inexpensively online.

The trick to strobes is making their output seem part of the overall lighting design. This means aiming them indirectly and warming them up a bit with gels. Don’t light the band from the front, and definitely not with an on-camera flash. If you’re working with two or more lights, vary the ratio so one is dominant-that will add depth.

When stage lighting brightens, I turn off the strobes and use the available light. A high ISO and shutter speeds of 1/125 sec or faster will work.

At slower speeds, I “spray and pray”-machine-gunning hundreds of shots, while hoping a few will work. Another ambient strategy: Paying close attention, and tripping the shutter when the subject is keeping relatively still.

● Capture images in RAW, not JPEG, to give yourself the leeway to fix color and density in postproduction.

● Compose for the audience, stage, and hall, as well as for the band. An active crowd and colorful stage set can add energy that typical band-only shots lack.

● Select camera angles so stage lights stand out against dark or contrasting backgrounds.

● Start photographing in smaller clubs and get to know the managers, security people, and lighting directors. Their cooperation is vital for you to take photos that really rock. 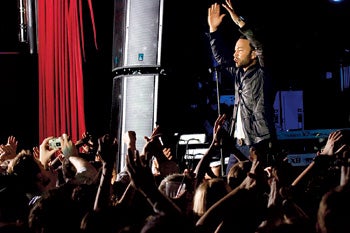