You Can Do It: Old Master

All you need is a flashlight -- and some stuff from Grandma's attic -- to find your inner Caravaggio. 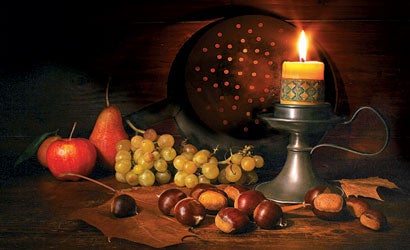 I’ve always been fascinated by the rapport between objects and light — how light influences shapes, colors, and shadows. In school, during art history classes, I was struck by the use of light and dark (or “chiaroscuro”) by painters of the 1600s, especially Caravaggio. He expertly illuminated his scenes to highlight and exalt his subjects, making them emerge forcefully from dark, shapeless backgrounds.

Still lifes of that period also fascinate me. Composed without any apparent rule, they were actually arranged according to complex, hidden geometries, rich in symbolism and significance to their painters. I developed a passion for trying to make similar images using my Canon EOS Digital Rebel XT and lighting them in ways that evoked Caravaggio.

The first challenge was finding subject matter. I looked for objects and utensils that had a timeless quality, and settled on implements used by my grandparents, who were farmers. In the photo on the previous page, since I had chosen a chestnut-roasting pan of theirs, I included chestnuts and — because of the season when chestnuts are roasted — autumn leaves.

My next challenge was the chiaroscuro lighting effect. The answer was easy: a flashlight. Composing my objects against a black background, I lit them by “painting with light,” a technique in which you use a flashlight like a brush. You apply the light to your subjects, defining their shapes and contours by carefully placing highlights and shadows. You do this while the shutter of your tripod-mounted camera is open.

I complicated this image by including a lit candle. It added light and simultaneously created intimacy and warmth. This meant, however, that I needed a 2-stop neutral-density filter to prevent overexposure of the flame itself. After examining a few test images on the Rebel’s LCD screen, I decided to add a second lit candle behind the roasting pan to bring out its overall shape and design.

If you want to try something similar, I suggest starting with as few objects as possible. The more you include, the more difficult it is to arrange. Try drawing it on paper before actually setting it up. Study a book on classic still lifes, and don’t hesitate to copy one!