You Can Do It: Mugshot

Use a wide-angle lens, get down on the ground, and shoot beastly portraits for seriously funny photos. 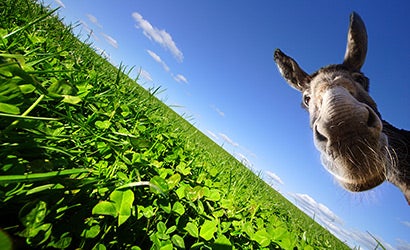 Living in Amesbury, a relatively rural British town in Wiltshire near famous Stonehenge, Chris Pethick has plenty of opportunity to photograph animals, mostly the domestic variety found in yards, parks, and pastures.

While the 23-year-old art school graduate is all about the Majesty of Nature, he also thinks animals can be pretty comical. In fact, while exploring their silly sides, he’s discovered that when photographed with ultrawide lenses, animals can be ultra-funny.

“For animal portraits, my most important tool is a 10-22mm f/3.5-4.5 EF-S Canon zoom,” he says. “It distorts perspective and makes long-faced animals look very cartoon-like, even anthropomorphic — especially when you get in close to the eyes or lips, their most humanlike features.”

Pethick shoots with a Canon EOS 20D, and uses two different techniques, depending on the weather. When Britain’s famously dismal skies cloud up, he uses the sky overhead as a natural softbox to backlight his subjects, and usually shoots black-and-white, as with this long-lashed giraffe he encountered in a private zoo.

On sunnier days, as when he photographed the donkey on the previous page, Pethick combines RAW images in Adobe Photoshop CS3 to maximize clean color. “I shoot all my animal portraits in RAW,” he says, “and, for colorful, brightly lit scenes, I make two exposures from a single RAW file.”

His first exposure is a slightly brightened version of what the camera captured. Then he makes a second variation that’s about 1.5 stops brighter. “This blows out the sky, but makes other colors really vibrant,” he explains.

To combine them, he places the brighter version in a layer on top of the darker. Then he uses the Eraser tool to rub away the blown-out sky, revealing the deep blue below.

Want to try a similar shot? “When you shoot moving animals outdoors,” Pethick says, “don’t waste time getting it all perfect in the camera. You can fix exposure problems later if you’re shooting RAW, and composition issues can often be fixed with judicious application of Photoshop’s cropping and cloning tools. Just shoot.”

And, he repeats, “get close. The closer you get, the funnier the portrait will be.” Another benefit? Getting in tight will often crop out the background clutter that ultrawide-angle lenses are so good at capturing!

Photographer, painter, and webmaster Chris Pethick recently graduated from Salisbury College (U.K.) with a degree in photography. For more of his work, visit www.capphotography.co.uk.