You Can Do It: Add Movement to Your Photos

Change directions when you pan to capture an entirely different sense of motion. 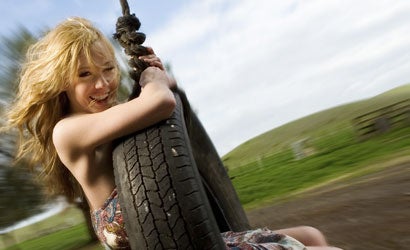 One surefire way to visually supercharge a scene is to add movement. Move camera, subject, or both. It doesn’t matter. Any way you do it, the kinetic excitement of motion can make a boring scene seem vibrant and alive.

Case in point: On one of my recent workshop outings (www.soophotography.com/workshop), I was shooting at a 300-acre ranch near Byron, CA. The moment the models and I drove up and I saw the tire swing, I knew I could use it to add movement.

What made the photo on the previous page a creative challenge was the way the movement was captured. Many photographers faced with this scene would have set the swing in motion parallel to the imaging plane and panned with the laterally moving model. (That’s what I did in the shot below.) Focusing is easy because the subject is always the same distance from the lens. With the correct shutter speed, the result can be thrilling: a sharp subject and a background of streaked motion blur.

But a lateral pan wouldn’t produce the dreamlike, vertiginous feel of the portrait on the preceding page. The model, while sharp, seems to sail toward the camera with an energy and sense of three dimensions that lateral panning can’t match.

How did I do it? I prefocused my Canon EOS 5D and 24-70mm f/2.8L Canon lens at a point directly in front of me, and asked the model to swing toward and away from the camera. I held the 5D at arm’s length, and as she swung toward the point of prefocus, I rapidly drew the camera in toward my chest as I opened the shutter 1/60 sec at f/11 (ISO 100). This unusual form of panning produced arrow-like streaks (notice the ground) that seem aimed directly at the viewer. The result: a dynamic sense of motion and dimensionality.

Want to try this yourself? Here are two suggestions: Pop a flash (balanced with the background lighting) for more subject sharpness, and tilt your camera to skew the horizon line. It will add an exciting dynamic to the composition that plays into the movement theme.