For soaring balloons, rolling sculptures, marauding sheep -- where to go and what to shoot in October. 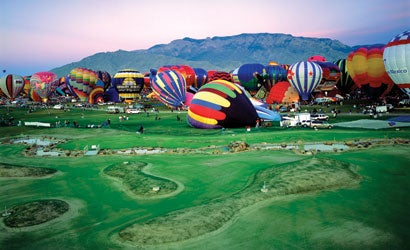 Where: Albuquerque, NM. When: October 6-14. What: The largest festival of its kind in the world draws up to 750 hot air balloons and 100,000 spectators. Kicking off with a mass ascension each day at 7 a.m., where the varicolored giants make their slow climb through a crisp blue sky, the week will be packed with dawn patrols, nighttime illuminations, and special balloons shaped like cows. Tips: Rise early to catch the sunrise over Sandia Crest while the balloons are being inflated — bring a wide-angle lens so that you can get close-ups of the balloons. But don’t forget a telephoto lens for later sky shots. Info: www.balloonfiesta.com; 888-422-7277.

Trailing of the Sheep

Where: Ketchum, ID. When: October 12-14. What: Squeamish of the gore and injuries of the running of the bulls in Pamplona? You can photograph horned beasts taking over a town at Ketchum’s Trailing of the Sheep. Shepherds herd their flocks through the main street of the city on their annual journey from mountains to lower, drier pastures. Tips: Don’t miss the moment when the flock is released onto the road and enters the town, after the Main Street parade at noon on Sunday. Stake out a spot at the junction of Highway 75 and Warm Springs Road, and pop into the street after the last band marches by. Info: www.trailingofthesheep.org; 800-634-3347.

Where: Ventura, CA. When: October 27. What: At the annual Kinetic Sculpture Race, the only perogative is to be outlandish. Entrants battle armed with the ingenuity of their vehicles, which — besides being able to travel over mud, sand, and water — must be entirely powered by people (preferably in costume). Past sculptures included fanged warthogs, plumed firebirds, and a giant Sponge Bob. Tips: The race launches in Ventura Harbor, then moves to land, giving you time to regroup and change lenses. For glamour shots, kayak out on the water at the beginning of the race. The sand race offers the best action shots, as the vehicles move super slowly; the mud race gives you the closest access (though by then the racers are pretty messy). Info: www.kineticrace.com; 805-652-0000.

Where: Manitou Springs, CO. When: October 27. What: The corpse of young Emma Crawford didn’t exactly stay at rest — originally buried at the top of Red Rock Mountain, the body came loose in an early 1900s flood and came tumbling into the canyon. Now the locals imitate her famous ride by racing down Manitou Avenue in coffins decked-out sinister, clever, or flat-out ridiculous (picture someone buried in a watermelon). Tips: Manitou Avenue is a two-lane street with a center lane for left-hand turns. Ask a race organizer at the registration table to find you a spot in one of these for great close-ups of the macabre racers. Info: www.manitousprings.org/coffin_races.htm; 800-642-2567.