Life Along the 38th Parallel 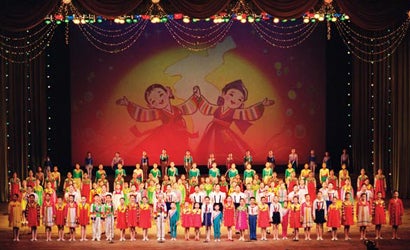 Media images of press conferences and the 38th parallel are virtually all that Western audiences know of the inside of North Korea. Travel visas are rare and hard to come by, especially for Americans, who were issued just 500 visas from 1985 through 2005. On more recent occasions when large groups of visitors have been allowed into the country, such as during the Mass Games, in celebration of Kim Jong Il’s father and predecessor, Kim Il Sung, photography access is limited.

Accomplished photojournalist Mark Edward Harris, granted one of the rare visas into the country, maximized his opportunity to capture as many facets as possible of North Korea’s hidden daily life. Now compiled in Inside North Korea (Chronicle Books, $35), his work serves as an introduction through images to this mysterious country.

The book is divided into two sections — Inside the Hermit Kingdom and The Great Divide — with nine parts total, and each is accompanied with a brief text introduction. Going from the capitol city, Pyongyang, to the mountain ranges of Geumgangsan, and on into the Demilitarized Zone, Harris captures the country’s vibrant cultural life as seen through its brightly colored dancers and gymnasts, the spectacle of the Arirang Mass Games, and the sets of Korea Film Studios. He just as often captures landscapes of awe-inspiring beauty, such as mountain ranges spotted with ancient Buddhist temples.

But prevailing in all the images is the political reality of North Korea. Images in Part I of the book (Inside the Hermit Kingdom) show the essence of communism through propaganda murals and the ubiquitous monuments and portraits of the former and current leaders. (One picture shows a public love-letter written to the North Korean leader, spelled out in white characters on a hillside near Sanbong, that reads, “Bravo Mr. Kim who is the Greatest Sunshine of the 21st Century!”)

Part II, The Great Divide, focuses on both the life and history of the DMZ along the 38th parallel. These images testify to the tensions between North and South simmering just below the surface. Harris captures the closeness of soldiers on either side, engaged in staring contests over the dividing line, guard towers facing opposite, or soldiers looking over elementary school children in one of the two villages (one North Korean, one South Korean) that exist within the DMZ region.

Above all this portion of the book testifies to what may be the most important and unhappy facts about the existence of this dividing line. As Harris writes, “An estimated one million families on the Korean peninsula are separated by the DMZ.” This may be why the book closes with the section on the South Korean side of the border, with pictures of those separated from their loved ones across the Freedom Bridge, students protesting the Status of Forces Agreement between their government and the United States, and, as a parting image, a mural at Dorasan Station that reads, in both Korean and English, “Not the last station from the South, but the first station to the North.”