How I Shot This: On Target

Photographer Michael Yamashita gives a lesson on zen and the art of photography. 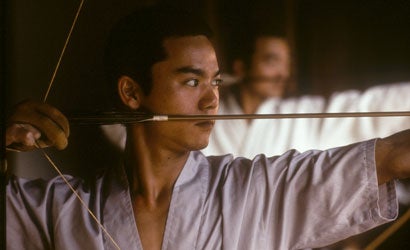 A third-generation Japanese-American, Michael Yamashita, 58, got his start in photography when he headed to Japan after college to study his roots. Although he initially picked up a camera to share his experiences with friends and family back home, he was soon hooked, and a few years later he got the plum job of traveling for a year shooting for Singapore Airlines. Upon his return to the States, he began photographing for National Geographic. These days he’s out on assignment about six months of the year.

Q. What are we looking at?
A. I was doing a story for National Geographic on Japanese-Americans. This was at the International Zen Dojo at the Chozen-Ji Temple in Honolulu. It’s kind of a Zen temple that brings in martial arts as part of the training of monks-to-be. In Zen archery, it’s form that’s important — it’s not about the aim. If your form is perfect, the arrow should hit the target. Kind of like with photography.

Q. Why this angle?
A. First, I got an overall picture, and of course there was a lot of stuff in the background. Anytime you shoot an activity, you’re going to need to try a lot of different frames and angles. You’re looking for that one frame that shows it all, but to get to it you have to shoot around the edges. You’re sort of investigating by shooting until — boom! — you see the picture you want.

Q. What makes this shot the best of the set?
A. Partly, it was just photographer’s luck. The guy in the back happens to be wearing white. This, combined with the repetition of their arms, just rivets your eye on the guy in the foreground, with his concentration and muscle strain. That bow is not light.

Q. What camera and lens did you use?
A. I was shooting the Nikon F3 in those days. It was film, of course — Kodachrome. Probably a 180mm f/2.8 lens, which is one of my favorite lenses. It gives you that very nice, out-of-focus, sharply undefined area in the background. That’s the wonderful thing about a fast telephoto.

Q. Are you all digital now?
A. I switched last year. There was certain discipline to shooting film — not that I ever skimped on film. Now it seems like my finger is constantly on the shutter button. I resisted changing to digital because I hated the computer. Used to be, when the light went down low, I’d hang up my cameras and look for the best restaurant. Nowadays, I go back to my hotel and start downloading.