How I Shot This: Razing Cane 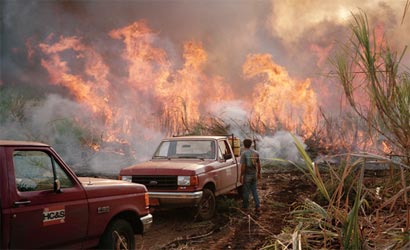 Elaine Mayes set out to be a painter, but, as a student at the San Francisco Art Institute in 1959, realized that all the cool people were in the basement doing photography — and that, as a photographer, she could go out and be in the world instead of holing up in a studio. In 1968 she became the first woman to teach photography at an American university. She was on the founding photography faculty at Hampshire College, then taught at Bard College for two years and at New York University for 17 before retiring from teaching in 2001.

Q. Where did you take this photo?
A. I was in Hawaii on a Guggenheim fellowship. I could photograph anything I wanted, but I shot in my usual way, which is to just go around looking at things. I discovered that the sugarcane industry was being replaced by developments — it was the beginning of the end of a 100-year-old tradition. I wanted to photograph everything I could that was disappearing and to go to places that were off-limits to ordinary people.

Q. What’s going on?
A. The sugarcane was harvested by burning it, then loading it onto trucks and taking it to the mill. Burning brings the sugar to the surface and eliminates parts of the leaves they don’t need. They light two diagonal corners of the field, and the fire meets in the center. The guy driving the truck took me down the road near the fire. It’s extremely hot and burns really fast. It’s pretty dangerous.

Q. What makes this the final image?
A. I had backed off because it was too hot to get any closer. Having the worker in the picture gives a sense of scale and hopefully tells more about why the fire’s happening.

Q. Any problems during the shoot?
A. Getting the right exposure was a nightmare. I had my lightmeter, but it was incredibly hot, and the whole thing happened very quickly. I was probably in that area for no more than 15 minutes. I bracketed. Some frames are overexposed, and some are underexposed. I had no idea if that film was going to come out and be printable. They went all the way from f/16 down to f/4 at 1/125. I didn’t have time to think.

Q. What camera did you use? What film?
A. This was Kodak VPH 400 negative — they don’t make it anymore. I always shoot negative film so I don’t have to get the exposure exactly right, and I have two 6×9 Fuji cameras. One has a lens that’s slightly wider than normal. I wanted to use those cameras so I could make very large prints with wonderful detail, but using them in that situation is difficult because they only allow eight pictures on a roll, and they’re hard to load.

Q. Why Hawaii?
A. In 1989 a friend of mine who’s a photographer in New York called me up and said, “It only costs $500 to go to Hawaii! Do you want to go?” Growing up in California, my friends got to go, and my family never went. I had always wanted to visit. As our plane was landing, I looked out and there was a rainbow! Then I learned that rainbows happen every day in Hawaii. I fell in love.