How I Shot This: Pea Shoots 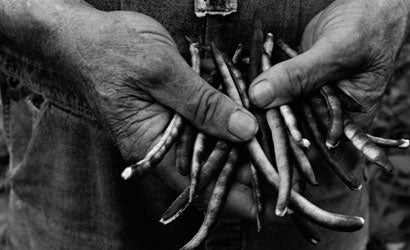 Perry Dilbeck, 41, was born in a small town in Tennessee, and he has dedicated his career to photographing people from towns like his. Last year, he published the book, The Last Harvest: Truck Farmers in the Deep South (Center for American Places, 2006; $32.50), from which these pictures are drawn.

Q. What are we looking at here?
A. This is a guy named Buster Brown. I know it’s kind of funny, but that’s his real name. Even the road he lives on is called Buster Brown Drive. He does farming part-time and he’s been living in that house 50-something years. He specializes in purple hull peas, which are a real deep, dark purple. He grows corn and squash, too. It’s a big thing now that everybody’s trying to buy local — he brags that they’ll drive 75 to 100 miles to buy his peas and corn.

Q. How did you get into this project?
A. I was driving around shooting people on their back porches, and I started running into all these farmers. A lot of them were selling their land. I wanted to document the tradition before it disappeared. Almost every farmer in this book used to farm with mules. Most of this land has been passed down over 100, 150 years — 30 or 40 acres at the most.

Q. What makes this the best of the set?
A. I like the detail of the peas and the patch on his overalls — it’s like a hunting dog. Also, his weathered hands and the peas are more powerful once you move in close and see their detail.

Q. What kind of camera did you use?
A. Ninety-five percent of the pictures in the book were taken with this little plastic camera called the Holga. But this one was shot with the Pentax 6×7 medium-format. I carry both of them, and with the Pentax there’s a little bit more detail.
For this picture, I wanted you to still be able to make out that little symbol on his overalls. You can get somewhat sharp with the Holga, but it falls off on the edges. My film is Ilford Delta 400. That’s all I ever used for this project.
I made my prints on Agfa Multicontrast Classic paper, which, unfortunately, they no longer make. I’m still looking for a replacement.