How I Shot This: Paul Nicklen 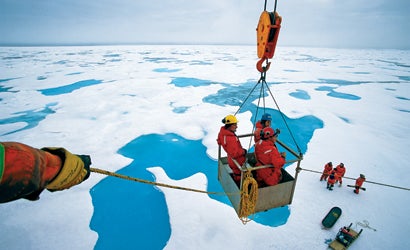 Paul Nicklen, 39, was raised on Baffin Island, part of the Canadian Arctic Archipelago. You could get lost half a mile out of town, so out of necessity he learned to read weather and light. With no TV, and with seals and seagulls for pets, Nicklen became strongly attuned to the natural world. His affinity followed him to Whitehorse, Yukon, where he now photographs mainly for National Geographic.

Q. What are we looking at?

A. In 2002 I was asked to go on a high-Arctic trip on the CCGS Louis S. St-Laurent ice breaker, which is a ship designed to bust through sea ice. It had 50 of the world’s leading biologists and other scientists on board. They wanted to get baseline data to study the effects of climate change on sea ice; they predict that by 2040 there will be no ice in the summer. This picture was taken on the Beaufort Sea, 200 miles north-northeast of Barrow, Alaska. The ship embedded itself, and the scientists were lowered onto the ice.

Q. What’s with the outfits?

A. Orange suits are Coast Guard standard issue for safety. They float.

Q. Is it chilly there?

A. Not bad. That was in August, which is summer in the Arctic, so it’s pretty nice, actually; about 26 degrees Fahrenheit. But with strong winds it can feel like 30 below.

A. I love it. You get 24 hours of daylight! Usually I sleep in the middle of the day when it’s sunny, from about 10 a.m. until 3 p.m., and I’ll shoot through the night. The sun skims the horizon. You know how they talk about that magic hour? Well, here it’s the magic 4 hours.

Q. What makes this photo the best of the set?

A. If only I could have gotten the bucket over the ice instead of the water… But this one’s the best because you get the whole picture: the scientist, the rope, the Inuit guy holding a gun in case of polar bears. I took every opportunity I could to get a picture. As soon as I saw that blue melt pond in the ice, and the contrast with the orange suits, I knew there’d be something special.