How I Shot This Flight School

A look at what's behind those funny little hats 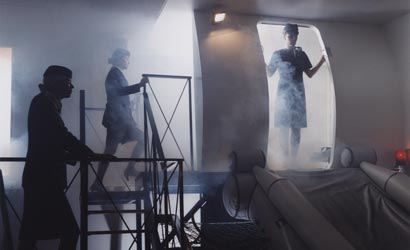 Born in Houston, TX, Brian Finke, 31, photographs subcultures. Though he has a Bachelor of Fine Arts from the School of Visual Arts in New York, he considers himself a documentarian, and has chronicled the lives of body builders, cheerleaders, football players and, for the past two and a half years, flight attendants. His personal projects and his editorial work often intersect (these images were shot for CITY magazine), and his photographs have appeared in Entertainment Weekly, Premiere, Rolling Stone, The New Yorker, and Time, among others.

Q. What are we looking at?
A. These photos were taken at the Icelandair flight attendant academy. They were going through drills for me.
Q. So it’s set up?
A. They do in fact do this drill, but this time it was for my benefit. The whole project has been made in different ways — some photographs are candid moments, others, like many of the portraits, are prearranged. To me, how the pictures are made is not really important. I am coming closer to the end of the project, and the school was something that I wanted to include.
Q. Where did the smoke come from?
A. There was a fireman on duty and we were working with him to produce the desired amount of smoke. He had a smoke machine, but the room would fill up with smoke, and then we’d stop and let some out and try again.
Q. How did you light it?
A. I stuck a Vivitar light behind the fake plane and I had a small Quantum flash on-camera.
Q. What camera do you use? Film?
A. A Hasselblad with a 16mm lens, and Fuji Pro H 120 film. It’s got nice exaggerated colors. I’ve used the film for a long time now because it makes ordinary situations a little more dramatic. And I always shoot with a square format. I think it’s because, growing up, watching TV everything was much closer to a square, and I like making very spontaneous reportage images in something that’s a classical format. Also, with that negative size I can make 40×40 exhibition prints.
Q. What makes this version the final one?
A. My on-camera flash didn’t fire correctly and I liked it. The darkness brings more emotion to the story. The dynamic of the three people creates much more of a narrative, and with the added elements of the red siren and the dramatic lighting from the single flash, it’s the winner.
Q. How did you get interested in the subject?
A. I was drawn to the uniforms. I had been traveling a lot anyway and became interested in the flight attendants. There’s something very nostalgic about flight attendants, and that combined with the tension that’s been inherent in air travel for the past few years makes an interesting project.
Q. Has the threat of terrorism impacted your work?
A. Not directly in the images, but to get permission it was lots of phone calls and dealing with airline public relations departments.
Q. What’s next for you?
A. One of my projects is photographing construction workers, and dealing with climbing the tall buildings. A lot of the time, my wife comes up with the ideas — I like going out and making the pictures.