How I Shot This

An adman/photographer finds the perfect spot for fly-fishing -- and lands a beauty. 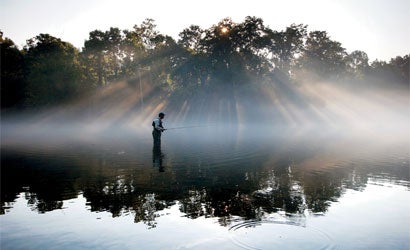 Ben Swihart didn’t take many pictures until his office was in need of an extra photographer. The pro at the ad agency in which Swihart is a partner slapped a Canon EOS 20D in his hand and showed him the ropes. Swihart was hooked immediately. Now he heads photography production, among other things, at his Bristol, TN, office.

Q. Was this for an ad?
A. This was absolutely a work shot. The company is a sports outfitter that specializes in fly fishing. The day of the shoot I spent that whole morning learning about it. I used to live near that part of the river, and it turns out to be one of the best fly fishing spots east of the Mississippi. I knew that mist showed up in the mornings pretty regularly. I wasn’t expecting these rays to come beaming down, but that’s what happened and it was just perfect.

Q. How’d you get the sky and the man so evenly exposed?
A. It’s a composite! From the beginning I planned it that way. I really wanted the fisherman to be visible, and I knew I couldn’t get him without blowing out the sky. I shot on the sky first, then I experimented to see how much I could make those rays pop in the bottom half. One of my areas of expertise is postproduction, so it was easy to put them together. I’m not a film guy. I know nothing about film. I don’t even know what would happen if I were ever given a film camera.

Q. What makes this your final image?
A. I think it’s the best shot I’ve ever taken. That one photo was just perfect because the fisherman who came with me had just finished explaining how complicated fly fishing was. They look for a little ripple in the water — they call it a bump. It’s very meaningful to the fly fisherman, and in a great lucky moment, we got one in the foreground. The trout said, “I want to be in the shot, too!”

Q. Did you do much directing?
A. I had the guy walk up the stream until I felt he was perfectly positioned in the rays, but in the end the picture transcended the reason for the shoot. We were all sitting there and going, “Damn.” It was all we could do not to just relax and enjoy the morning. It really didn’t seem much like work that day.

1. The close-up’s nice, and the mist sure looks ethereal, but without the sky and the treetops, there’s less of a sense of place.
2. Nice movement, but this shot’s no ray of sunshine.