Capture Kauai’s Gems from Above 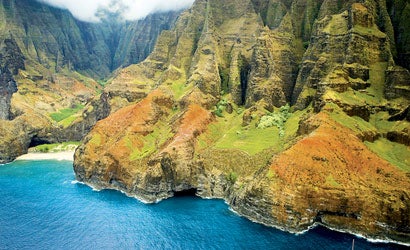 You won’t come home from the Hawaiian island of Kauai without a beautiful picture. Not with its white sand beaches, rainbow-lit waterfalls, wild orchids and hibiscus. But its real photo treasures, such as the rugged sea cliffs of the Napali Coast and misty craters of Mount Waialeale, are very hard to reach on foot. That’s why a helicopter tour is a must.

How to get aerials? The most seasoned travel shooters take chartered helicopters. These fly without doors and let you request an itinerary, though they can run upwards of $1,000 per passenger. But you can get great photos on a helicopter tour — hour-long trips run about $100-260 per person. It just takes some planning and these tips from photographer Jad Davenport.

A list of helicopter tour companies partnered with the Kauai Visitors Bureau can be found at www.kauaidiscovery.com/activities/air_tours. If you go with another one, check its safety first at www.ntsb.gov. Most operators let you book just a few days in advance but, for a guarantee, plan a month ahead.

While most commercial tours give you only a window view (request a window in advance), Jack Harter Helicopters offers a Hughes 500 tour with the doors off for best visibility. Price: $260 per person.

2. Choose sides. If you can, stick to the right side of the copter — most commercial helicopters circle the island clockwise, and that side will get better views of such stunning locations as the Napali Coast.

3. Avoid reflections. Wear black, and if you’re at a window, shoot with your lens as close as possible to the plexiglass. A flexible rubber lens hood can help here.

4. Skip the polarizer. Shooting through a window, a polarizer will give you a purple cast from the tinted plexiglass; shooting out a door, a little bit of polarization will bring out contrast in the mountains, but too much can make the water and sky go black.

5. Shoot fast . . . and shoot a lot. Seemingly invisible helicopter blades above can creep into shots, so try to shoot at least at 1/1000 sec if light allows. Bring backup memory cards — they’ll fill up fast, especially if you shoot RAW. If you’re shooting through an open door, make sure you keep your cards (and lenses and other gear) zipped tight in your vest or pockets, since if they get sucked out of the cockpit there’s a chance they’ll strike the tail rotor (never a good thing).

6. Rise early. Early morning light will give you best views of the Napali Coast with the sun to your back, as well as the mist rising from Mount Waialeale. Additionally, Kauai is one of the wettest places on earth — though rainfall during your trip is inevitable, it occurs most frequently in the afternoon, and an early morning flight will give you better odds of clear skies.

7. Go wide and autofocus. Depth of field is irrelevant from way up there, so use the widest aperture possible and let your camera do the focusing.