A new book of old images explores the awakening mind of an artist in the former Soviet Union. 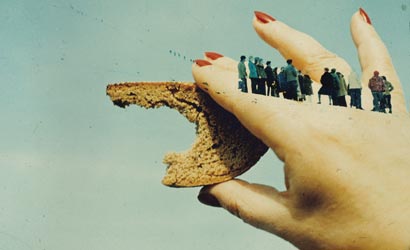 In explaining why it took nearly 50 years for the images in Yesterday’s Sandwich (Phaidon, April 2007; $60) to see the light of day, Boris Mikhailov, one of the most influential contemporary Russian photo artists, recounts first showing them to photography censor Serguei Morozov. “He exclaimed, ‘Oh no! It’s horrendous!'” Mikhailov writes in the book’s introduction. “I replied that the horrendous also has its place in art. Morozov was silent for a moment then he declared: ‘This stuff will be exhibited over my dead body!’ In fact, Sandwich was never shown officially during the Soviet regime.”

Today, Mikhailov may live most through legend as a documentarian of ordinary life in the former USSR, from the ’60s through perestroika. In days when arts were tightly censored and Western eyes were allowed few glimpses of the world behind the Iron Curtain, Mikhailov taught himself photography while working as a railroad engineer, to witness and capture the faces of individuals under communism, against its backdrop charged with symbols and slogans.

Since the collapse of the Soviet Union, Mikhailov’s work has grown increasingly bold and critical. One of his most famed series, “Case History,” captured the fate of the homeless and other casualties of the social system as life scraped by without adequate social care. Compare this to his earlier work, where his criticism was veiled in metaphor and suggestion, relying on an unspoken narrative to tie the clues together. It is this that makes Yesterday’s Sandwich most interesting. A series of 52 images, each is composed of two color slides overlaid to portray a reality that is both fantastic and infinitely suggestive.

In an age where compositing images is as easy as two clicks in Photoshop, Yesterday’s Sandwich compels a deeper examination of the art of combining images. Here, it isn’t simply about aesthetic but of the more complicated truth inherent in two compressed realities. “This was a period of hidden meanings and coded messages in all genres,” Mikhailov writes in the essay accompanying the book. “Given the scarcity of real news, everyone was on the lookout for the smallest piece of new information, hoping to uncover a secret or read between the lines. Encryption was the only way to explore forbidden subjects such as politics, religion, nudity.”

Printed on unbound boards and packaged in a cardboard case, Yesterday’s Sandwich isn’t a book you can pick up and page through; instead, you have to hold each of the tableaux with care as you sort through them like a deck of cards. There bizarre reality ranges from the surreal to the ridiculous to the disturbing or the sublime. Like the Mikhailov we are familiar with, they show the trains and factories of industry, the impassive walls of windows or desolate courtyards of housing complexes, often overlaid with disembodied shapes and patterns of autumn leaves, a hunched nude woman, a beautiful model sprawled seductively on the grass. Over the greater external Soviet world is the more privately charged world of the artist, a mind equally preoccupied with physical beauty and sexuality. (“In those days,” he writes, “my view was through a woman’s body.”)

Most of all, the images in Yesterday’s Sandwich offer a look into the private explorations of a young artist, using the medium of the exposure and negative to seek out a way to understand the world around him, what he describes as one of “conflicting meanings,” “dualism and contradictions.”

Reflecting on the past as the photos are published, forty-seven years after they were begun in a society that has since witnessed an epoch of change, Mikhailov reviews the images, in a way, as a testament to the importance of documenting one’s own journey while documenting the surrounding world.

“A lack of memory destroys faith in the future,” he writes. “In other words, everything happens within the span of a single life.”