How to shoot big-budget, dramatic car photos on about 20 bucks. 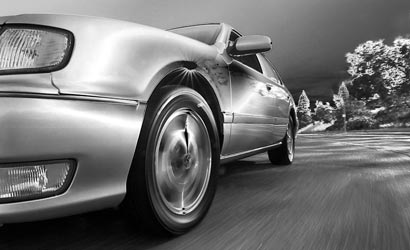 I’m always thrilled by the low-angle car photos in magazine and TV ads, so when my camera club picked “Motion” for the month’s assignment, I decided to go for it.

The only problem? Those sexy car ads are usually shot from a chase vehicle that has a camera mounted on a superexpensive hydraulic boom. On my next-to-nothing budget, I had neither, and would have to build a boom of my own to shoot my car while driving it. If you’re not the handy type, I’d take a pass on this project — if you are, read on!

Once you’ve built your boom, find a seldom-used roadway for test shoots — cul de sacs and empty parking lots are ideal. Avoid intersections, and have a friend act as a lookout. When driving, don’t look at the camera as you shoot — keep your eye on the road.

Select backgrounds and camera angles with care. Objects at extreme distances from the camera will not show much blur, even at relatively high speeds — choose locations with bright, colorful objects other cars, for example) in the midground. Select a camera angle and focal length that will include your entire car, as well as a great swath of foreground street. Often, pavement blur forms the most visually exciting element in these shots.

Shoot on areas of smooth asphalt: Rough surfaces can cause excessive camera shake. Also, ensure that your main light (usually the sun) is striking the side of the car that’s being photographed. Driving with the sun behind you can cause excessive lens flare, but you should experiment — sometimes flare can be a cool effect.

I started with an inexpensive point-and-shoot for test shots. (In the event of problems, I was more willing to sacrifice this than the Canon EOS Digital Rebel and 12-24mm Tokina rig that I used for the “real” shots.)

To expose the pictures, I fired the camera’s shutter with the self-timer and, with the Digital Rebel, also with an infrared remote trigger. Both strategies worked well. If you use your camera’s self-timer, have the car in position, engine idling. You don’t need to rush, since a 10-second self-timer allows plenty of time for your assistant to fire the camera and for you to hit the gas and get up speed before the shutter opens.

At shutter speeds of about 1/10 sec or slower (depending on ambient light), car speeds between 6 and 10 mph can produce an exhilarating feeling of motion in the final picture. With a self-timer, though, you only get one shot per run, while a wireless remote can give you dozens.

What made this project so exciting was the opportunity for experimentation. I adjusted shutter speed, camera tilts, and car speed — and each change resulted in radically different images. What’s next? Shooting with the camera low to the ground directly in front … of a moving bicycle!