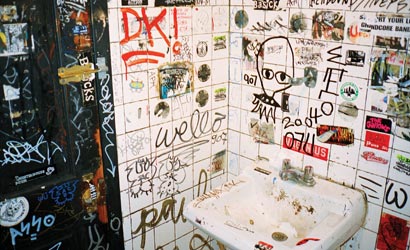 While most people living in New York may not have heard of an artist called UFO, most of them have seen his work. Recognizable on walls, staircases, and storefronts all over the city’s boroughs (and, reportedly, in locations such as Bangkok and Costa Rica), the tag of UFO 907 — which usually appears as a google-eyed bubble mask set on top of a flying saucer with propulsion flames — is pretty much ubiquitous. While no one can pinpoint the exact date it got started (U.F.O. the artist is notorious for his underground status, and when he makes a public appearance, he does so with sunglasses and a bandana over his face), locals remember first seeing it at least 15 years ago.

For three years, an art collective called Combustive Motor Corporation (Chris Noble, Caleb Scott, Jack Warren, and Alex Wright), has obsessively researched and documented the work of UFO 907. The culmination of their work, U.F.O., is a broader, more conceptual look at the subject than a simple collection of images. Referring to it as “the phenomenon of U.F.O. graffiti occurring throughout New York City,” they are analyzing the semiotics of graffiti alongside the cultural representation of aliens. These elusive symbols spray-painted in enormous letters at the tops of high buildings are as mysterious as crop marks. Who did them, and why, and how is it possible that it went unwitnessed? Alongside the images is the artists’ research into actual sightings and accounts of extraterrestrial activity, dating back to the ’40s, and an exploration of aliens in art, beginning with cave drawings and going up to David Bowie. UFO 907 doesn’t actually appear in the book, either because the artists couldn’t track him down (not unlikely) or for effect. CMC is going more for the way we interact with symbols than an actual explanation for them.

Finally, CMC has provided a pullout titled “Field Guide to UFO Classification,” featuring descriptions and diagrams of the different glyphs the artist. Those living in or visiting NYC might be obliged to take their flashlights and cameras to the streets in their own street-art alien hunt.