Protect your camera gear when shooting photos in the snow

Condensation can be a real jerk. 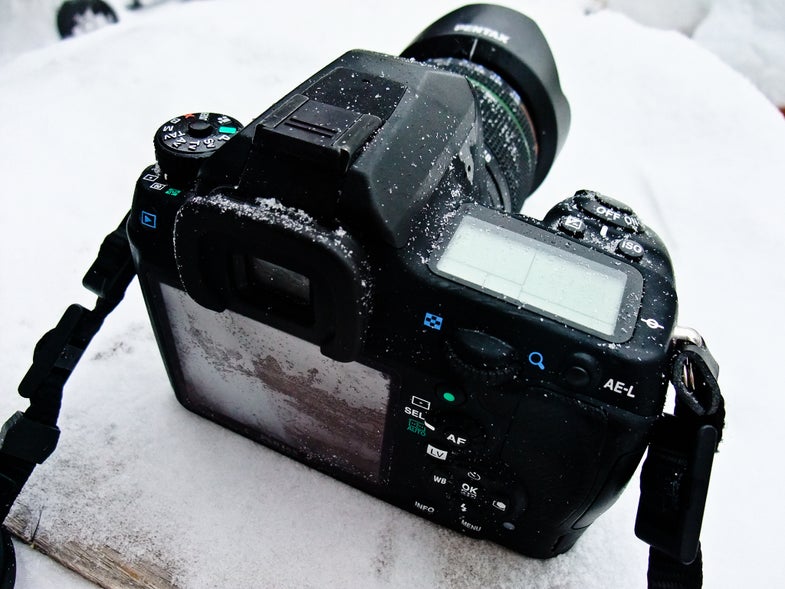 Going out for a photo shoot in the snow can be amazing, but those wonderful white flakes—and the cold temperatures that go with them—can wreak havoc on your camera. To find out how to best keep your gear safe when shooting in wintery conditions, we asked a couple experts for their strategies. John Shafer is a veteran big-mountain sports photographer and camera writer who has been lugging gear up and down the slopes since the film days. Roger Cicala is the founder of LensRentals, and Aaron Closz is their repair department manager, so they have seen more than their fair share of weather-beaten cameras.

Condensation can be a killer

Long ago, I was told that it was crucial to put a camera in a plastic bag when going from warm to cold to prevent condensation from forming inside the camera and possibly frying the delicate electronics, but Closz says the risk is “pretty minimal as far as permanent damage.” What that condensation can do, however, is fog your lens to the point where taking pictures is nearly impossible.

“The best way to avoid fog,” says Shafer, “is to keep your camera in your bag for a while when you first go out. The camera bag acts as an insulator and allows your camera gear to warm or cool slowly. When my lens does fog up, there’s not much you can do about it but wait.”

As for the plastic bag, Closz says, “it really depends on how paranoid you are,” but that it can help keep moisture out of your camera, especially if you’re going from cold to warm. Putting it under your coat, on the other hand, can be a bad idea because you’re likely sweating from exertion, even in the cold temperatures, and introducing more moisture into the equation is the last thing you want to do.

Do you need a rain cover, or is the camera’s weather sealing enough?

You’ve probably heard the fact that some lenses aren’t truly weather-sealed unless they’re equipped with a filter on the front, and it turns out there’s truth in that statement. “It is apparently sufficient to claim a lens is weather sealed when a rubber gasket is applied to the camera mount alone,” says Closz. “Some lenses really aren’t weather-sealed unless they have a filter on the front. In general, if the front element moves back and forth within the barrel when focusing or zooming you’d better put a filter on it.”

Drawing from years of experience, John Shafer has found that he doesn’t rally need a rain cover. “I trust the weatherproofing. I’ve used all kinds of cameras in all kinds of conditions,” but as a pro, he’s not afraid to put his gear in harm’s way to get a shot. If the weather sealing on your lenses still makes you a little worried, Closz recommends adding a little extra protection around the mount. “get a thick rubber band, or even a hair scrunchie and put it around the lens-camera mount.”

Closz’s advice is simple: “Be sure to brush off any snow around the mount first. Better yet, don’t change lenses.”

Shafer, in his years on the mountain, has developed a technique to help him change glass while minimizing risk. He uses a MindShift pack, which has a built-in fanny pack that allows him some protected working space for when the camera guts are exposed. “I keep my camera facing down into the pack and I lean over it to further protect it. It’s good to also pay attention to which way the snow is blowing so you can have your back to it. I remove the lens, keeping the camera body down so no snow can get in, switch the rear cap from one lens to the other, and then put the new lens on the body. Speed is of the essence and practice makes perfect. If you haven’t practiced, it might be best to just stick to one lens.” If it’s coming down hard enough, there are times where even the pros won’t take the risk of changing lenses.

What if you drop your camera in the snow?

It’s easy to panic if your precious camera takes a tumble into some fresh powder, but the decisions you make once it hits the ground might be the difference between a quick fix and a pricy trip to the service center. “Pick it up quickly, maybe by the strap,” says Closz. “Your body warmth will quickly turn that innocent white substance into a vicious stream of destructive capillarity. Use a cold glove to brush all the snow off, or just blow it off before taking it inside. Especially get all the snow away from doors, covers, and lens mounts. Stay out in the cold until you get the camera well-cleaned.”

Use a lens hood

“A lens shade is the best way to keep your lens dry in the snow or the rain,” says Shafer. “But if it’s windy and snowing sideways, sometimes you just can’t keep the lens dry. I keep a good lens cloth in my bag, but there are times when it can’t be helped. When that happens, I just hope the water spots add character to the photo.”

Cold weather annihilates battery life, and opening that battery door means exposing internal camera bits to the elements. So, make sure your battery is as charged as it can be before heading out. “You can also put your camera battery in a pocket with a chemical hand warmer if the cold is sapping your power,” says Shafer.

What if the camera just turns off?

If you have shot a lot in the cold, chances are your camera has just turned off at some point for no clear reason. It’s a scary thing and could be a serious one. “Don’t be that guy and turn it off and on 14 times hoping it starts up,” says Closz. “If you are shooting and suddenly your camera fails, turns it off immediately, take it inside, and dry it out thoroughly overnight with the compartment doors open and the lens off. The condensation may evaporate and things may work perfectly again, but if you run a lot of current through wet things, bad things happen.”

Or, you could take Roger Cicala’s advice: “Stay indoors and take pictures through the windows.” Wise words from a warm man.

[Big thanks to Roger and Aaron from LensRentals and John Shafer.]