Why should video journalists be able to broadcast their files on the fly while photographers can't? 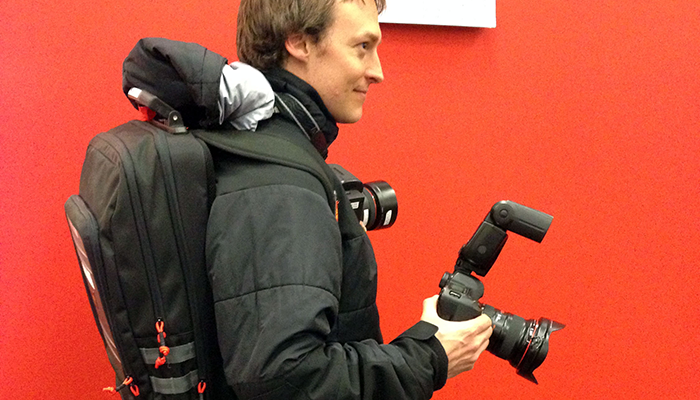 While covering the 2012 Presidential elections, New York Times photographer Josh Haner discovered that the TV journalists had a major advantage on their photographer brethren. While the photographers would have to pull images off their cards, label them, and then transmit them back to their editors, the video crews were able to live stream the footage back to home base. So using his own technical background and the help of some of the more technical people at the Times, Haner was able to create his own version of this technology—a backpack for streaming files straight back to his editor’s desk.

Capital New York profiled Haner and his project, and explained how it works. Inside the backpack is a small, battery-powered Linux computer. It uses proprietary technology to take the image files, and then split them into many parts, streamed over four cellular modems through both AT&T and Verizon. The segmentation and then recompiling at the other end is handled via BitTorrent. That way the load is distributed over multiple connections, allowing for much more stable image transmission. Not only that, but the system also allows the photographer to attach audio tags to the images, rather than have to enter them via text.

The backpack is a constantly changing design. Right now, it automatically transmits small, web-sized versions of the images, and then editors can flag individual files to get the larger ones transmitted back as well. In its current iteration, it weighs around 12.5lbs and costs around $2,400—a bit big and pricey, but hardly out of the question for a major news organization covering a big event.

Haner is also working on various smaller versions. He currently has a functional fanny pack model for just sending specific images (rather than everything at once), and is working on one the size of a deck of cards. It sounds very much like what a WiFi card can do, but it’s built for speed and reliability, which can make all the difference in this context. It’s also capable of integration into a large networked workflow, which is also a key piece of the puzzle.

Image transmission is proving to be a major issue for big and newsworthy events. Much of the progress in this area is happening in sports stadiums, as they can be strictly set up and controlled. At the 2012 Olympics, a special hard-wired system let photographers quickly beam images back and forth. And Canon has been experimenting with wireless transmission at Golf events. But sporting events are far les freeform and free-roaming than political rallies and breaking news. But as technology progresses, we might not be too far from every photographer carrying a small, powerful transmitter in their camera bag alongside spare batteries and cards.