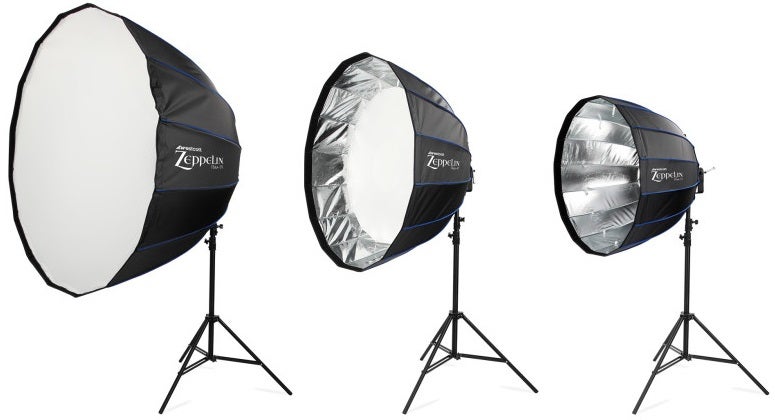 The strap that came with your camera is fine, but BlackRapid’s The Shot strap takes camera carrying to another level. The strap attaches to the the camera’s tripod socket, so it hangs upside down at your side rather than around your neck. The strap itself is made from super-strong, orange nylon webbing and the rubber shoulder pad prevents it from slipping off your shoulder.

There are two versions of the strap, one that goes over your shoulder and another that goes across your body like a typical R-strap, so you can choose where you want the camera to hang.

A new strap might not seem like a big deal, but it can be the difference between taking your camera with you and leaving it home and that makes a big difference.

When you go off to college, it’s basically a give that you’ll be making a lot of videos. Some of them will be school projects and some will be fun, stupid stuff that you’ll regret in ten years. But, whatever video you’re going to make, it should have good audio and that’s where this handy passive microphone comes in. It’s extremely compact and mounts right in a camera’s hot shoe, so it will work with lots of DSLRs and mirrorless cameras. It has a tight recording pattern straight in front of the camera so it’s great for interviews or recording at events.

Dads will appreciate it, too. Because when your baby says its first word, you can hear it in crystal clear audio that blows a smartphone out of the water.

Because it records audio directly into the camera, rather than to an external recorder, you don’t have to sync up the audio in post, which makes editing a lot easier.

We love camera bags, but sometimes they’re even better when they don’t look like regular camera bags. The Lowepro Urban Reporter is an understated bag that doesn’t shout, “Hey, I’m full of pricy camera gear!” That can be a big plus when you want to be inconspicuous.

The 150 is the smallest version and it has enough space for a DSLR with a lens, as well as a 10-inch tablet and some accessories to get you through the day. If you step up to the 250 or the 350, you can fit a full-on laptop and a whole pile of gear.

The gear insert is also removable, so if you want, you can fill the whole thing to the brim with school books or diapers depending on whether you’re getting it for a dad or a grad.

Since the decades when Polaroid cameras ruled, the instant photograph has always been a hit at parties. This compact printer brings the concept into the current generation.

Using a dedicated app, this little printer connects directly with smartphones. You can choose a photo and the printer will immediately make a small, instant Instax print of the photo for you. Several people can connect to the printer at once and it uses standard, easy-to-find Instax film.

You can even overlay things like borders and messages onto the photos before printing them. It’s a great party favor for a college bash or a kid’s second birthday.

One of the beautiful things about college is that many of them still have film photography classes and the darkroom facilities to go along with them. It’s our opinion that having shot, developed, and printed a few rolls of Kodak Tri-X is something that every photographer should do in their career, even if that is getting to be difficult.

Tri-X is a stone cold classic of a film stock. It has lots of contrast and a fair bit of grain, which gives it an extremely distinguishable appearance. It’s oh-so-much better than any of the black-and-white Instagram filters.

And if you’re buying it for your photo enthusiast dad, it will probably bring back great memories and the faint smell of fixer. Plus, it makes a great side gift if you want to pick them up a used film camera, many of which are available for extremely cheap online.

Gregory Heisler, 50 Portraits: Stories and Techniques From a Photographer’s Photographer $23

Even if you don’t know his name (which you should), you have definitely seen Gregory Heisler’s portrait work. He has shot covers for some of the biggest magazines in the world of some of the most notable celebrities on the planet.

In his book, he takes 50 of his iconic portraits and explains the process behind them. It’s a great mix of information, ranging from the broad to the specifically technical. It’s a book that’s full of education and inspiration.

The digital version is great because you can search, but the hardcover printed version with the big beautiful photos is just as good a coffee table book as it is an instructional manual.

These easy-to-assemble parabolic soft boxes are some of the most versatile light-shaping tools around. The parabolic shape gives them a wrap-around quality to the light that makes subjects really glow.

They have a reflective interior, so you can shoot them with the outer diffuser, the inner baffle, a combination of the two, or with no diffusion at all. That gives you a ton of options in terms of light quality.

They’re built to be extremely tough and use simple speed rings with 16 heat-resistant rods, so you can use them with flashes or hot lights.

Ultimately, it gives light that’s more dramatic than an umbrella without making the process more complicated.

For both dads and grads, landscape photography can be a great way to escape the stresses of everyday life. You’re out in the world, crafting a photograph in a beautiful setting. It’s like meditation. And a good tripod head is an essential part of the process.

Manfrotto’s new 3-Way tripod head has collapsable handles so it won’t get stuck on everything as you try to pack it away. Each movement has its own friction adjustment, so you can make it as easy or as difficult to turn as you’d like,

The plate is built incredibly sturdy, so there’s no fear of your camera tumbling to the ground while you’re shooting, even if it’s flipped into portrait orientation. Because with college or kids to pay for, no one wants to have to pay to repair a broken camera.

In many dorm rooms, the computer screen also pulls double duty as the main TV. That’s not a job for a lowly laptop screen, which is why this beautiful 24-inch monitor makes such a great gift.

The 1920 x 1200 resolution makes it above HD and it’s capable of reproducing more than a billion unique colors. It’s also an IPS monitor, which means it produces accurate and stable colors perfect for editing photos, especially if you’re going to be printing them.

But, even beyond its image editing prowess, it’s just a beautiful 24-inch screen that’s bright and accurate whether you’re grinding away in Lightroom or watching episodes of Archer.

Now that laptops dominate desktops in terms of usage and wifi is just about everywhere, you can sit down and do work in just about any location. The problem is that laptop screens tend to get dominated by sun glare. That’s where there clever light tent comes in.

The whole things folds down flat and expands into a small teepee that shades your screen from visibility-killing light. There are slots on the side so you can still access all of your USB ports to plug in accessories.

When you’re done using it, you simply fold it back up and slide it back into the bag. It’s perfect if you’re trying to work on photos (or even essays) while enjoying nice weather in the quad or edit photos while the kids play in the park.

OK, so the name is a bit of a turn off, but this is one of the most clever iPhone cases around for photographers. Slide out the simple remote and hold the button down for a few seconds. A red light flashes and you now have a remote shutter button for your iPhone camera.

It attaches via Bluetooth and actuates the volume button that triggers the camera’s shutter. It’s like having a little Pocket Wizard that fires your phone.

It seems like a bit of a novelty, but it can actually come in handy if you want to take odd-angle shots, set up a remote video, or, yes, even take a selfy. Plus, the case has a nicely curved back that makes the phone bigger but also makes it fit a little better in your hand.

Hard drives will always make a great gift because they’re infinitely useful, but something we hate having to buy for ourselves. Western Digital’s My Cloud service works, in a way, like a traditional external hard drive. Inside is between two and four TB of storage to hold plenty of photo files as well as anything else your dad or grad might need to store.

The My Cloud, however, has a robust online sharing technology built-in that lets you do things like backup your photos from the road to the drive or access your media files from a mobile device even when you’re far from home. The idea is to keep your data safe and accessible without giving up a lot of personal information to a third-party service.

It’s incredibly easy to set-up and WD’s drives are some of the most reliable in the game.