By combining photographs with multiple focal depths, this app replicates something like light field technology 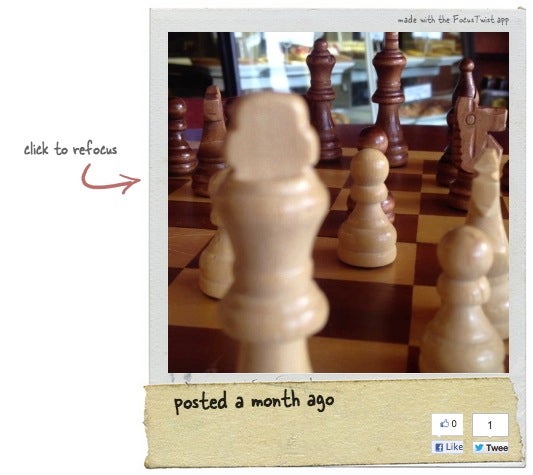 Ever since the announcement of the Lytro camera, the idea of being able to select the focus point in an image after the fact has been intriguing some photographers. We’ve seen that same concept replicated by using a video file from a manually focussed DSLR, but a new app brings something similar to the iPhone.

FocusTwist is available for $2.99 in the App Store, allows iOS users to create a single image from a series of photographs taken with differing focal points. These images can be then shared online, and users can click on various points in the image to adjust where the focus is, like you can see in this example.

It’s pretty clear from looking at the exampled on FocusTwist’s homepage, that this is just an extremely basic version of focus stacking. Three images are taken, where different parts of the scene are in focus for each, and combined into a single file. While focus stacking is usually used to increase the depth of field, say if you’re shooting macro, in this case you can just switch between the differently focussed versions.

Unfortunately, with some of the images, shifting between the different focal points isn’t exactly seamless.

Still, it’s an interesting toy. And while it doesn’t have quite the same technological underpinnings as the light field technology of the Lytro, it does replicate the same functionality on the cheap.