By mimicking the human eye, Rambus claims to be able to massively improve dynamic range on small sensors 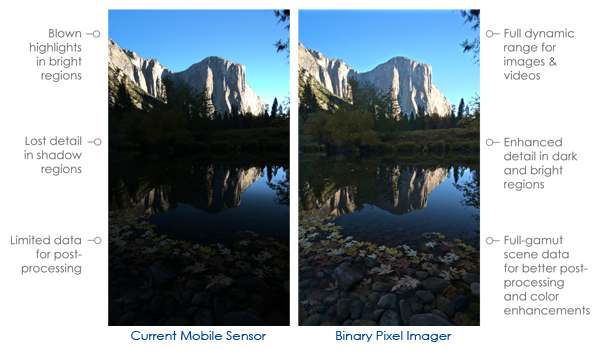 If you’ve ever used your cellphone or a tiny compact to try and capture bright light and deep shadows while outdoors, you know exactly how poor the dynamic range of a small sensor can be. The traditional way around this is either using some sort of HDR technology, or just upping into bigger sensor. But now a company is claiming that it can massively improve the way these small sensors handle dynamic range, through a technique called “binary pixels”.

They claim it will be able to significantly improve low light performance, as well as single-shot HDR. It’s not immediately clear how this new technology works. Rambus claims to have a proof-of-concept chip, and describes it as:

Which unfortunately doesn’t really tell us anything. DPReview seems to have a slightly clearer grasp on the technology, and offers a more cogent explanation:

The “binary pixel” technology seems to be a combination of chip and architecture, but would be able to be crafted using already set-up manufacturing systems. According to Engadget, there might even be a way to make it work with existing sensors and processors.

As a side note, the company Rambus has an interesting past, and has been involved in a series of patent litigations since the early 90s that have seen the company labeled a “patent troll”. Hopefully this new technology isn’t just another avenue for them to aggressively go after other companies.