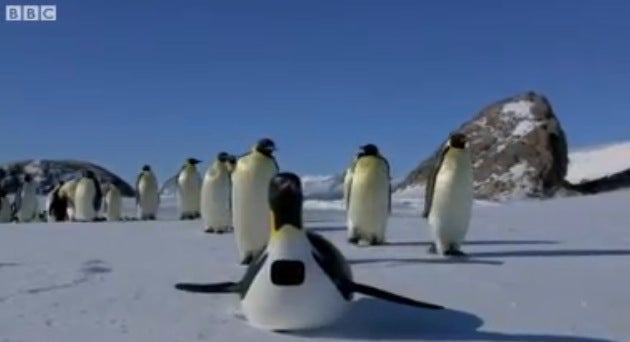 Most wild animals don’t take it too kindly if you want to get up close and personal to record their every day lives. For many wildlife documentary makers, this means remote cameras, long zooms, and bird blinds. But a new documentary from the BBC has taken a very different tack: they built multiple remote controlled “penguin-cams” that got adopted by the flock as one of their own.

The documentary is called Penguins – Spy in the Huddle, and any of our readers in the UK can watch it online right now. For the rest of us, we’ll have to be content with the snippets exposed in a YouTube clip. The film makers crafted multiple penguin-cams, each able to perform different actions to blend in with a different species. The Emperor Penguin model had a camera in its belly, and one in its eye, and was able to roll along the ice. Others could walk or swim, and they even created eggs with cameras built-in.

The filming took a year, and the various penguins seemed more than willing to adopt the penguin-cams as members of their own tribe — which has lead to some really incredible looking footage.