A Camera Inside a Bouncing Ball Could Save Lives

A throwable camera could be used to help police, firemen, and emergency workers 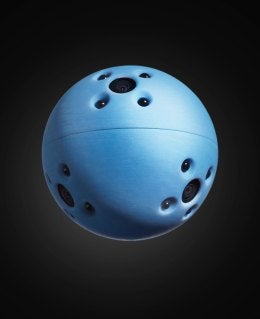 A duo of developers out of MIT are hard at work on a new device, a throwable camera that’s been dubbed Bounce. While still in development, this interesting looking camera has already been dubbed one of Time Magazine’s best inventions of 2012. The Bounce is a small, semi-disposable ball, studded with embedded cameras and sensors. The concept is that you can just throw it into a room in a hazardous situation, and it’ll beam back a panorama of the room, as well as other information.

Pegged to cost about $500 a unit, it won’t require highly trained technicians, and with few moving parts, it should be pretty resilient. Firefighters, rescue workers, and the police will be able to simply throw the ball into a potentially dangerous area, and see just what the situation is.

This isn’t the first throwable ball camera we’ve seen, but it’s the first that’s specifically designed for emergency situations, and has a reasonable price tag. The similar looking but robotic EyeBall went for around $5,000, and didn’t exactly live up to the hype.

While $500 isn’t exactly pocket change, unlike an expensive robot, you won’t be tempted to send people into a life threatening situation in order to retrieve the bounce. Or you could just tie an elastic cord to it, and reel it back in.

The Bounce has been receiving a lot of attention of late, with stories appearing in the BBC, the Technology Review, New Scientist, and others. The team behind the device is hoping to have working versions for testing by SWAT teams and Massachusetts police departments in January — here’s hoping it spreads widely after that.