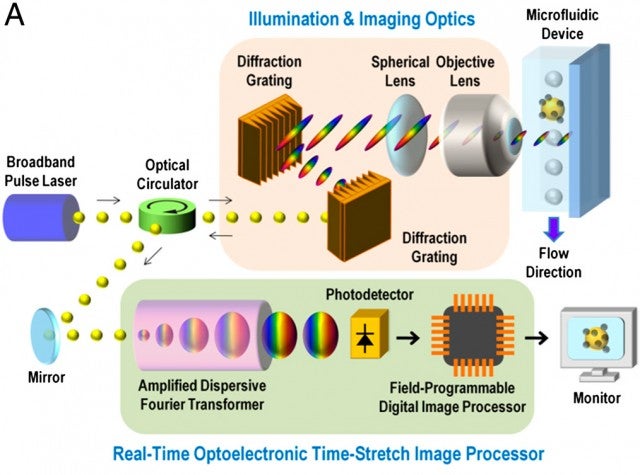 UCLA has unveiled a new medical camera that is one of the world’s fastest, capturing 36.7 million frames per second, with a shutter speed measured in picoseconds. With an official name of “automated flow-through single-particle optical microscope,” the new hardware has been described on UCLA’s website and in the Proceedings of the National Academy of Science.

This camera is a world removed from what you’ll shoot in everyday life. It’s used to detect cancerous cells amongst many, many healthy ones by capturing millions of them in very short amounts of time, and analyzing them for defects. A traditional CCD or CMOS would be far too slow for this, so the technology relies on a method developed by UCLA called STEAM imaging: serial time-encoded amplified microscopy. The camera fires off laser pulses which reflect off of cells flowing through a special device, and the reflections are then amplified and picked up by a high-speed single-pixel photodetector.

The advantage to this technique is that it allows for the analysis of a huge number of cells to detect cancer in its very early stages, and may be more sensitive and accurate than other high-speed but non-photographic techniques like flow cytometers.

Since each frame of those millions of frames per second is just a pixel, the effective rate is the ability to analyze 100,000 blood cells in a single second, each of which is moving at 4 meters per second.

So, how do you deal with that much data? The plan is to program an FPGA to automatically detect the cancerous cells.

However, as fast as this is, it’s still not quite as speedy as the psuedo-one trillion FPS camera from MIT (though they are very different beasts).