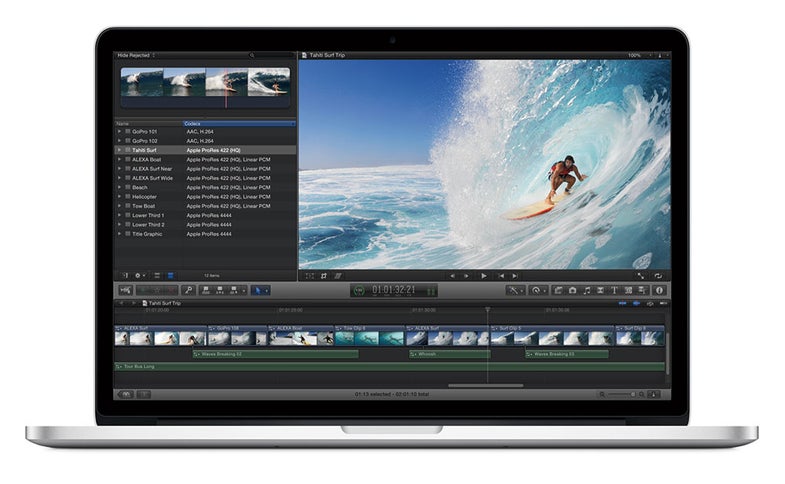 We just got back from checking out the new top-tier MacBook Pro with Retina display, and it is indeed as drool-worthy as we thought. With a resolution of 2880×1800 pixels (up from 1440×900 pixels in the previous 15” model), it packs four times the pixels into the same amount of space. Checking out images on it is much like looking through a transparency on a lightbox – it’s that clear and crisp. You really understand what four times the pixels means when you open a full resolution raw file shot from a 36.3MP camera like Nikon’s D800 and zoom in to 100%. On a typical 15″ notebook screen you’d expect to see, say, an eyeball, but with this display you’re looking at a whole face. Because the pixels are so tightly packed, an image at 100% appears smaller. Suddenly, a 36.3MP file size doesn’t seem so big – it seems quite reasonable.

The super resolution screen isn’t the only thing about this new notebook that will appeal to photographers. It’s remarkably thin and light, maxes out at 16 GB RAM and uses a solid state drive, which means ridiculously speedy booting. If you shoot tethered and do your editing and raw conversion before you reach home, the new MacBook Pro will be a dream machine. Sure, it’s missing some niceties like an DVD slot and an Ethernet port, but Apple is making relatively inexpensive adapters for those. (And we’d recommend them – can you imagine downloading the whole Adobe Creative Suite over wifi?)

What’s the catch about the new display? Your files look best when they’re running on apps specifically updated for the Retina display. We checked out several high resolution RAW files in Aperture and they looked incredible. We are interested to see, though, how similarly-sized images look in software that’s not optimized for the display. We’d be nervous to make any critical image-editing decisions on a non-Retina-optimized app because, when viewing in one of those, the image (or any info displayed) undergoes a sort of interpolation process. In it, each pixel is displayed four times, so your image may look a little “grainy”. The Retina-ready version of Photoshop was on view in beta form at the WWDC this past Monday, so we are hoping that means that the updated version of CS6 will be available soon. In the mean time, all Apple’s apps that ship with the machine are Retina-ready, as are Aperture and FinalCut Pro.

Buried among the MacBook pro fanfare are lots of improvements to Aperture, which is now in version 3.3 and costs just $80. There have always been some tools that we liked using in iPhoto that weren’t present in Aperture and vice versa. But until now the libraries were separate, so you may have needed to import your files twice. Now, using Aperture, you can merge your iPhoto and Aperture libraries. Whatever you do to an image in Aperture will show up in your iPhoto library and vice versa. Even iPhoto -specific filters show up in Aperture.

The coolest new feature of Aperture may be the speed at which import works when coupled with the new MacBook Pro. There’s a new checkbox that allows you to privilege the JPEG preview over RAW rendering, so you can browse your newest images almost as fast as you can shoot them.