The NHK's newest Ultra High Definition camera captures 7680x4320 video at a 120fps for 4 billion pixels per second of data. 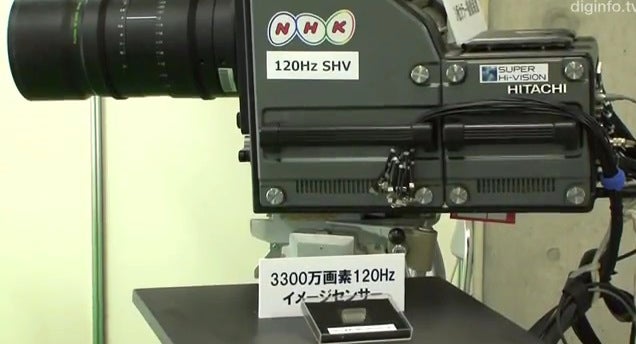 1080p is everywhere and 4K seems like it’s just over the horizon, but this is a whole level beyond that. NHK (nippon housou kyoukai, or the Japan Broadcasting Corporation) has been working on a specification for some time dubbed Ultra High Definition Television or UHDTV. This new generation of broadcast will be at 8K, that’s 7680×4320 — or 33-megapixels per frame. So what beast of a camera is needed to record this video?

In conjunction with Shizuoka University, the NHK has created a camera not just capable of recording video stills that large, but of doing so as 120fps to avoid motion blur. 33-megapixels at 120fps? That’s almost 4-billion pixels per second streaming onto a specially designed 1.5-inch CMOS sensor that can handle the data rate of 51.2 Gbps, which then shunts the video into 96 parallel channels.

Apparently, the NHK is now working on boosting the light sensitivity of the devices, with the aim of getting UHDTV into Japanese homes in the 2015-2020 window. You may get to see this tech in action before then, as the London Olympics will be using UHDTV streams to broadcast to 15-meter large screens in London.