While arguably hideous, this could be the start of a new generation of wearable camera 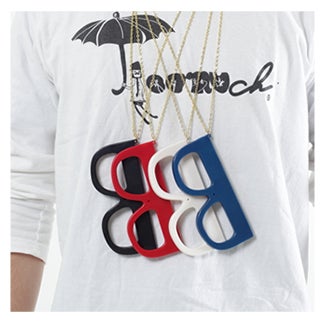 Wearable camera-glasses have never been exactly aesthetically pleasing, with the majority attempting to be some sort of James Bond spy-gear, but mostly looking terrible. The Fuuvi Megane Eye Glasses, on the other hand, deliberately play up their camp side, and while they might not be at all secretive, the camera part of it is remarkably hard to spot.

The glasses have an f/2.8 lens, fixed 1/33s shutter speed, and weigh just 33g. They shoot to a micro-SD card, and can be charged by USB cable. The official specs simultaneously say that the still image resolution is 2048×1536 and 2-megapixels, which makes very little sense, and it can record up to an hour of 720×480 video. At $60, it’ll hardly break the bank, and while I’m not hugely fond of the way the Fuuvi Megane Eye Glasses, they have the potential to become something more useful.

The current generation of helmet cameras are unwieldy beasts, and easily get in the way of the action, unless they’re installed just right. These glasses, as ugly as they are, look just like ugly glasses, rather than glasses with a camera strapped to them. Hopefully, it won’t be long before we see similarly cheap and small camera setups that can be strapped to your helmet, without the bulk or cumbersomeness of most other helmet cams. In fact, Liquid Image already makes goggles with built-in action cameras, so a pair of reasonable-looking sunglasses can’t be that far off.