Without a lens, it doesn't take a photo, but it takes someone else's. 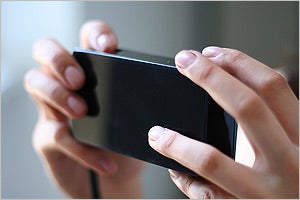 In a market flooded with nigh-identical compact cameras, how do you create something completely different? How about a camera that doesn’t actually take photos. What? The Blind Camera is a concept by Sascha Pohflepp, and you could almost call it the exact opposite of a normal camera — an un-camera.

While I think it’s a nifty concept that shows just how many images are being uploaded by people constantly, the creator isn’t doing himself any favors by explaining it with sentences like “in a way, it belongs _half _to the person who had pressed the button and still remembers that moment. Because of that connection, the photos are never dismissed as random, no matter how enigmatic they may be.”

Yeah, it’s a bit goofy and pretentious, but I do find it a bit charming that you can press a button, and see what someone else saw at exactly the same time, somewhere else in the world. And hey, at least the camera isn’t embedded into the back of anyone’s head.